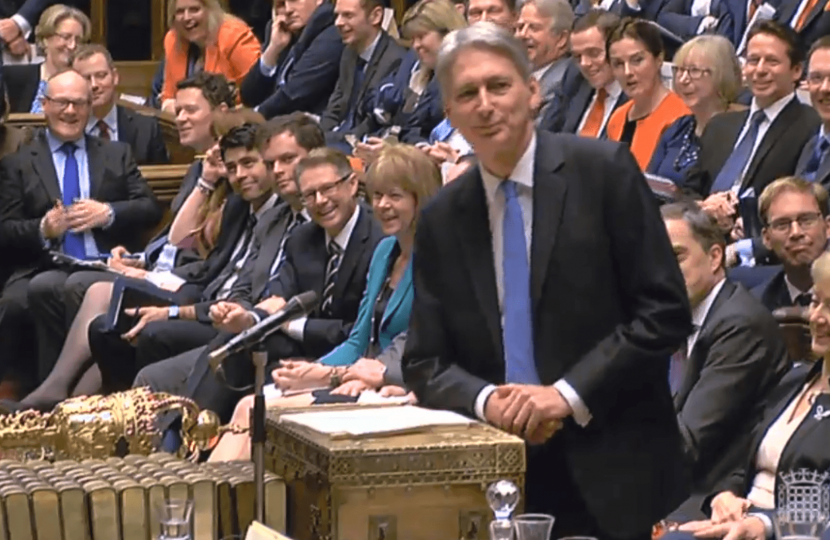 This Budget lays the foundations for a Britain fit for the future – investing for the long-term while supporting families and businesses under pressure now, setting a path to a more prosperous Britain.

A balanced approach to the economy

We will take a balanced approach to government spending, getting debt falling but also investing in our key public services, like the NHS, and keeping taxes low. Key OBR forecasts at this Budget:

Building the new economy – and a Britain fit for the future

Investing more than £30 billion to transform productivity in our economy. We will upgrade Britain’s economic infrastructure by expanding the National Productivity Investment Fund by £8 billion so we can invest in rail, broadband, science and innovation – taking the total size of the fund to over £30 billion. This will ensure our new industrial strategy transforms the economy to guarantee a brighter future for the next generation.

Harnessing the potential of emerging technologies. We will invest over £500m in a range of initiatives from Artificial Intelligence, to 5G and full fibre broadband, and provide backing to autonomous and electric vehicles.

Giving people the skills to thrive in the new economy. We are launching an historic partnership between Government, the CBI and the TUC to set the strategic direction for a National Retraining Scheme, giving people the skills they need throughout life to get a well-paid job. We will also invest £177 million for maths teaching, with schools offered a £600 incentive for each student who decides to study maths, and investing £42 million in teacher training. We will also provide £84 million to triple the number of fully-qualified computer science teachers supported by a new National Centre for Computing.

Modernising transport. We are launching a new £1.7 billion Transforming Cities Fund for our city regions, with half going to our six elected metro mayors so they have the firepower to deliver on local transport needs.

Backing British Business. We will help our army of 5.5 million small businesses by bringing forward the planned Business Rates switch from RPI to CPI to April 2018, worth £2.3 billion to businesses over the next five years. And we will unlock over £20 billion of investment to allow small, innovative UK firms to scale-up.

Supporting families in their everyday lives

Backing our great British pubs. To support thousands of small pubs, we’ll extend the £1,000 discount for pubs with a rateable value of less than £100,000 to March 2019. And we will help budgets go further by freezing duties on ciders, wines, spirits and beers.

Cutting fuel duty for millions of hardworking people. We will cancel the fuel duty rise scheduled for April – keeping it frozen for the eighth consecutive year meaning the average car driver is £850 better off since 2010.

Investing more in our NHS. More people than ever are using our NHS, and we will help deal with those pressures, with an additional £2.8 billion of funding to 2019-20, including £350 million for this winter and £1.6 billion next year. And we will deliver another £10 billion in capital to upgrade buildings and facilities, ensuring our NHS is fit for the future. We will also provide additional funding for agreed nurses pay rises so that patient services are protected.

Reducing the amount of time that people have to wait for Universal Credit. The switch to Universal Credit is a necessary change, and it is working. But we recognise the practical difficulties with the system. So we will remove the 7 day waiting period, so that claimants only have to wait 5 weeks for their first claim. While we are increasing the amount of advances available, so that – if needed – a household can receive a full month’s claim within 5 days. Any new Universal Credit claimant in receipt of Housing Benefit, will continue to receive it for two weeks. This is a £1.5 billion package to address concerns about the delivery of the benefit.

Abolishing stamp duty for over 80 per cent of first time buyers. We have abolished SDLT altogether for all first time buyer purchases up to £300,000. The exemption will also be available to properties up to £500,000, but will stop thereafter. This means an effective discount of up to £5,000 for a property of £500,000.

Investing an additional £15 billion for housebuilding – taking the total this Parliament to £44 billion. We will invest £2.7 billion to double the housing infrastructure fund, £1.7 billion to unlock small and strategic sites, £400 million on estate regeneration, £1.5 billion to support SME builders, and provide £8 billion on guarantees – committing a total of £44 billion over the next five years.

Helping Local Authorities to deliver new homes. The Homes and Communities Agency will expand to become ‘Homes England’ bringing together money, expertise, and planning and compulsory purchase powers with a clear remit to facilitate delivery of sufficient new homes, where they are most needed, to achieve our goal and to deliver a sustained improvement in affordability.

Reforming planning to unlock land for homes. We will continue to protect our green belt, and make better use of urban land. We will consult on introducing minimum density rules in urban areas and near transport hubs, and expect councils to permit more homes for first time buyers.

Getting the skilled workforce in place to construct the homes. We are providing £40 million to develop construction skills across the country, so we can create skilled jobs and build the high quality homes we need.

Getting the best Brexit deal for Britain

Getting Britain ready for Brexit. We want and expect to make a success of Brexit, and for that we must ensure that the country is prepared for every possible outcome. We have already invested £700 million in Brexit preparations and today the Chancellor set aside a further £3 billion, to get Britain ready over the next two years.

Clamping down on tax avoidance and evasion

Continuing to tackle tax avoidance and evasion. Today, we announce more measures to tackle tax avoidance and evasion, and non-compliance. This builds on significant action already taken; including securing almost £160 billion of tax revenues since 2010, introducing over 100 measures, and making the UK’s tax gap fall to a record low of 6.0 per cent.