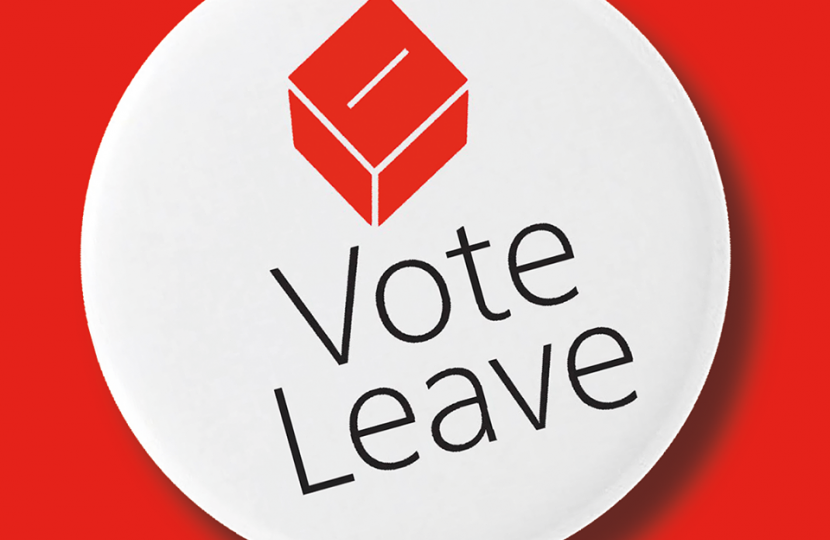 “I am honoured to have been part of this historic vote by which the Prime Minister will now be able to implement the will of the British people in formally starting the UK’s exit from the EU.”

“It was important to me to vote not just on behalf of the residents in Mid-Cornwall who voted for Brexit in last year’s referendum, but also the majority of people across the country who voted to leave.”

“I am pleased that MPs overwhelmingly voted for this Bill, although it was again a shame to see the Liberal Democrats failing to live up to their name, voting to defy the British People and frustrate the majority.”

“Next week the Bill will go on to the committee stage, where various amendments are being tabled to delay or dilute us leaving the EU. I will certainly do all I can to resist any attempts to do so.”

“As the formal negotiations begin, along with my Cornish MP colleagues I will of course be doing my very best to ensure Cornwall gets the best deal possible from Brexit and look forward to working closely with colleagues both locally and in Westminster to achieve just that.”

“I am pleased that we have now had the referendum to decide the United Kingdom’s membership of the European Union.”

“This was a Manifesto commitment of the Conservative Government, one that I was proud to stand on and one that we have delivered on after just one year in government.”

“As someone who has supported the leave campaign from day one I am delighted at the result. The British people have spoken and there is now a clear democratic mandate for us to leave the EU. I was pleased that the mandate from the people of Cornwall was higher than the national average. It is now down to the Government to implement the will of the people and set the leaving mechanism in motion.”

“While I am disappointed that the Prime Minister has chosen to resign once a successor is in place, I fully respect his reasons for doing so. While I did not agree with him on this issue, he has done a great deal for the country, becoming Prime Minister at the height of the last economic crisis and steering the UK back to its international standing as a global powerhouse.”

“We now need to look forward and I will be doing everything I can to ensure the best possible outcome for this country, and Cornwall in particular over the coming months.”

Since I embarked on the journey to become your MP in January 2013, I have always made my Euro-sceptic views clear. I believe our relationship with the EU is no longer working in Britain's best interests. However, I supported the Prime Minister in his negotiations and reserved my ultimate decision until the outcome.

Following his announcement, I will be voting to leave the EU on the referendum date of 23rd June, and will outline my views below.

The Prime Minister has achieved a number of changes to Britain’s relationship with the EU. These include; an opt-out from the ‘ever closer union’ objective, protection for the UK and other countries who remain outside of the Eurozone and an up-to-seven year emergency brake, which can only be used once for use on the benefits paid to EU migrant workers who come to work in this country.

While I believe the deal he has struck is a notable improvement from the status quo, it falls far short of the ‘Common Market’ association that I want to see and from which I believe the rest of Europe would also benefit. There is even a question mark about the deal being subject to a vote of MEPs and potentially subject to revision by future Treaty changes, demonstrating that the fundamental supremacy of European laws and institutions will remain in force. I wish that the EU as a whole had taken this opportunity to reform itself into a much better and effective organisation, one that is more engaged with the wishes and concerns of its citizens.

The regrettable fact, however, is that it did not take this chance. We have reports that other member countries are now belatedly trying to secure for themselves some of the changes being demanded by the Prime Minister, but too many – like President Hollande – remain utterly wedded to the process of a United States of Europe. During the discussion on the UK’s demands this week, it was instructive to note the demands made by Belgium and others that this should be the end of the UK’s attempts to steer Europe in a different direction and to secure special opt outs. This only showed the true thoughts of the EU elite, that the only reform they want is to promote an ever closer union and that all problems can be solved by more Europe.  In reality, this renegotiation should be the start, and not the end, of reform.

There are some benefits to belonging to the EU such as the Free Trade arrangements and access to European markets. Cornwall has also benefited from millions of pounds of EU support. However, I believe we have now reached a point where the cost and negative impact of being in the EU outweigh the benefits. The monies given by Europe to Cornwall often come with restrictions which makes it very difficult to access and directly benefit the people of Cornwall. If we leave, any Government will honor any commitments for funding in terms of regional development, in fact it would be able to manage it better and target areas which need support without being constrained by EU rules.

Every time I meet Ministers they often tell me stories of just how constricted they are by EU regulation. For example, the UK was impotent when it came to helping our steel industry a few months ago due to EU laws (which take supremacy over UK law) on state aid. Another topical case of EU laws overruling the will of the British Government came last year when despite there being a clear wish for women’s sanitary products to become zero-VAT rated, existing EU laws in place prevented any changes to this policy being made.

Additionally, our economy has been further harmed at the hands of the EU Common Fisheries Policy. This piece of legislation is quite frankly not fit for purpose and certainly does not give our hard working fishing communities their fair share of catch quotas compared to many other countries in Europe.

The future is uncertain and no one can predict what the EU will look like in five or 10 years’ time. The migrant crisis, slow growth, economic instability in the Eurozone and ‎political changes in individual countries, create a very real risk that remaining in could drag our country down.

By far the biggest risk in my opinion, is staying in an EU which is increasingly having to deal with crisis after crisis, most of its own making. For example the Eurozone meltdown, where countries who should not be in a currency union together, are causing enormous economic hardship with almost 50% youth unemployment in Greece, Spain and Italy. In addition, the migration crisis where the open borders policy makes it very difficult to control migration. If the EU cannot get its act together to sort these issues out, then how is it going to tackle bigger issues in the 21st Century?

Some argue that if we leave we will not be able to influence decision making. Since 1996 there have been 55 occasions when the UK has voted against the EU Council and every time we were out voted. Yet the UK economy is stronger and growing faster than any other EU country; we are in a good position to continue to thrive outside of the EU. We are the fifth largest economy in the world. We are a member of the G7. We have a permanent seat at the UN Security Council, are a key member of NATO and project soft power across the globe, second only to the USA. We have historic influence and trading links with the Commonwealth and a special relationship with the United States. The idea that we are suddenly going to pull up the drawbridge and isolate ourselves, or be cast adrift as an international pariah, is nonsensical. We are a global player and can thrive, not just survive, outside the EU.

Some argue we would become like Norway or Switzerland, which incidentally are two of the wealthiest and happiest countries in the world, who pay to have access to EU markets. As a per head of population, they pay far less than we do and they are free to trade with whoever they like. But for reasons outlined above, I am certain we could have far better terms with the EU than Norway or Switzerland, following a vote to leave.

For many, immigration is an important factor in the European debate. For me, it is an issue that goes far beyond our membership of the EU and, although it has a bearing on this debate, it is not one that would be resolved simply by the UK leaving the EU. We will have emigration and immigration issues whether inside or outside the EU. The modern global economy will continue to require the movement of labour around the world for all sorts of reasons. In sensible numbers, migration enhances economic efficiency and is socially and culturally enriching.

However, currently we have no control over migrants coming from the EU. This is putting a strain on local infrastructure and services who cannot plan or prepare for the numbers of people arriving. Outside the EU we would be able to set our own rules. My preference would be an Australian style points-based system, which every year the number of people arriving would be debated in Parliament with a breakdown for the number of students, skilled/unskilled workers and asylum seekers. This system would be fair, transparent and not based on nationality with import from business, universities and other interest groups.

I hope this clarifies my position on the EU referendum. However, it is important to remember that the ultimate decision does not lie with the politicians. This will be an opportunity for the people of this country to have their say on our future relationship with the EU for the first time in 40 years and I will be voting to leave.