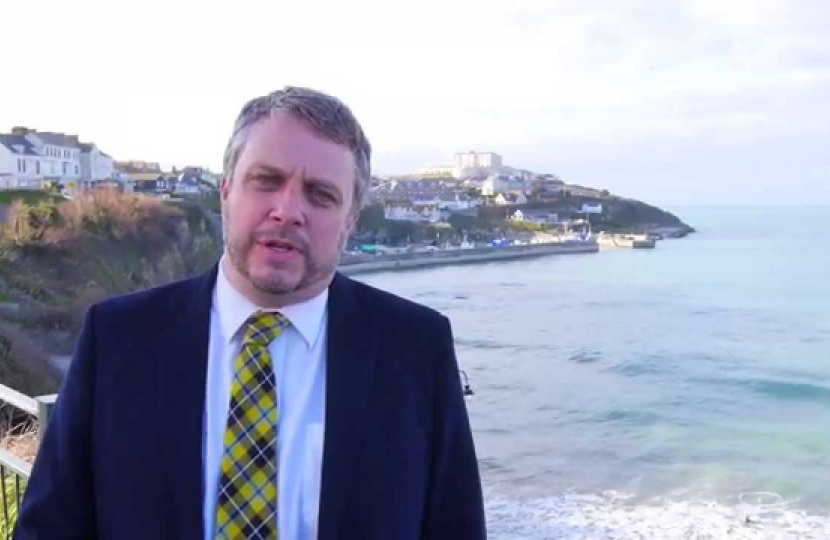 Steve Double, Member of Parliament for St Austell and Newquay has today written to the Head of Planning at Cornwall Council, urging him to turn down the latest attempt to build houses on cliffs above Whipsiderry Beach.

In his letter to Phil Mason, the Head of Planning at Cornwall Council, Steve writes:

“…there remain major issues with how the Marine Management Organisation (MMO) have conducted their role in these applications. I have raised these with the Minister of State at the Department for Environment, Food and Rural Affairs, who confirmed that errors by the MMO had taken place here, and am continuing to work with DEFRA to change the way the MMO work in cases like this in the future.

Apart from my concerns with the MMO, and thus the weight Cornwall Council should give their flawed decision-making on this site, I would also like to object on the following reasons.

The current application is an overdevelopment of the existing site

The current application, if built, would have a detrimental visual impact on the coastline as well as the Cliffside and beach.

As per my previous correspondence, many of the residents who have contacted me tell me that the path, which the applicant has branded ‘temporary’, which runs along the cliff-edge, has been used by the public for many years, some even report using it for more than 50 years, whereas others, including the Cornwall Councillor for the area, John Fitter, tells me that the path and land in question was given for public enjoyment in the 1970s and was even maintained by Cornwall Council until a year or so ago, with substantial repairs to fencing carried out in the area in question.

In fact, as the South West Coast Path previously said, the path would appear likely to have accrued public right of access as it has been in use for many years, without challenge from the previous owners.

I understand that the Ramblers Association have also applied to have the current footpath recognised as a public right of way on the definitive map. Should this application be considered and determined before a decision is reached on the planning application?

I also understand that the applicant has with this most recent application, submitted inaccurate paperwork, including an earlier version of the MMO license that does not include additional conditions, and an ecology report that had been previously rejected by the MMO.

There has also again been a significant public outcry on this application, with over 250 objections received by Cornwall Council and registered as of my writing of this letter.

Bearing all of these issues in mind, I hope that Cornwall Council will make a sensible and informed decision, listen to the overwhelming public opinion on this matter, and reject this application.”

“As with previous applications on this site, I am yet to be convinced the developer, Cornwall Council or the MMO have considered the many valid concerns that both myself and many local people have about this site.”

“I hope that Cornwall Council will do the right thing here, listen to the valid and sensible evidence that has been put before them, and reject this application.”

Steve Double, Member of Parliament for St Austell and Newquay has welcomed the decision by Cornwall Council to reject plans for housing at the site of the former Paradise Cove Hotel, Newquay.

The plans, which would have seen public access denied to a stretch of coastal footpath, had received strong opposition from local residents, and on the strength of this feeling, Steve had written to the Council, highlighting these objections and urging the Council to save the footpath.

‘I am pleased to see Cornwall Council has listened to my concerns as well as those of so many of the local community who contacted them and me regarding the planning application at the former Paradise Hotel site and has come to a sensible decision.’

'Our precious coastal footpaths are irreplaceable and community assets that should be nurtured and kept for ours and future generations to enjoy.'

'I would also like to congratulate the ‘Save Our Cliff Path’ group for showing that well-organised grass roots campaigning can make Cornwall Council listen and act on behalf of the community it is there to serve'.

I write with reference to your attached correspondence.

I have discussed this application with the Case Officer and can advise that the site has planning permission for 7 units; that permission appears to have been implemented some years ago through the demolition of the original hotel, although that permission did not include any permanent closure of the footpath.  The applicants have stated that the scheme permitted under the previous permission is no longer financially viable and, therefore, sought pre-application advice for a revised scheme.  The issue of the footpath was raised very early in the pre-application process and a member of the Countryside Team accompanied the Case Officer on a site visit with the applicants to discuss the options in respect of the footpath.  Officers strongly encouraged the applicants to ensure the relevant footpaths licences etc. were in place prior to the submission of a formal planning application, however, we could not insist on this and the applicants have chosen not to follow our advice in this respect.

During the pre-application process the applicants suggested that the path would have to be permanently diverted as the cliff stabilisation works required for the re-development of the site would be such that the meshing etc. would extend well back into the site, encompassing the existing path. However, based on the reports submitted thus far with the application the Case Officer has not determined whether the Engineer’s preliminary plan supports this.  We are awaiting comments from our Marine Engineer in respect of this matter.  In addition, no information has been submitted as to why the path could not be brought further back, away from the cliff edge, rather than be re-routed alongside the road.

The Case Officer is currently awaiting formal comments from the Footpaths Team on this application but please be assured that the issue of the footpath is being carefully considered as part of the determination process and this, together with all other relevant planning considerations, will be properly assessed prior to a decision being made.

I trust this information is of assistance.

Steve Double, Member of Parliament for St Austell and Newquay, has today added his support to the concerns raised by local residents over the future of a section of the Porth coast path.

“I have recently received a great deal of correspondence regarding planning application at the old Paradise Cover hotel site, particularly regarding the proposed changes to the footpath that currently runs through it.”

“Many of the residents who have contacted me tell me that the path, which runs along the cliff-edge, has been used by the public for many years, some even report using it for more than 50 years, whereas others, including the Cornwall Councillor for the area, John Fitter, tells me that the path and land in question was given for public enjoyment in the 1970s and was even maintained by Cornwall Council until a year or so ago, with substantial repairs to fencing carried out in the area in question.”

“I also agree with the South West Coast Path Association’s statement in their objection that ‘it would appear likely to have accrued public right of access as it has been in use for many years, without challenge from the previous owners’.”

“With the number of objections already registered and organisations such as the South West Coast Path Association objecting to the plans, the message from the people is clear: it would be a great loss to the local area if the application in question was approved.”

“I have today written to the Head of Planning at Cornwall Council, outlining my concerns and urged him to listen to the overwhelming public opinion on this matter, backed up with the strong concerns from the local ward member, ask that Cornwall Council’s officers take the strength of these objections into account when making their decision. “

“A developer’s profit should not be prioritised over the public’s ability to enjoy this stretch of beautiful coastal path.”

“I am delighted that our Member of Parliament is able to offer such positive support to the community at Porth who have concern about fate of the much used coastal foot path which runs alongside the site of the development of the former Paradise Cove Hotel”.