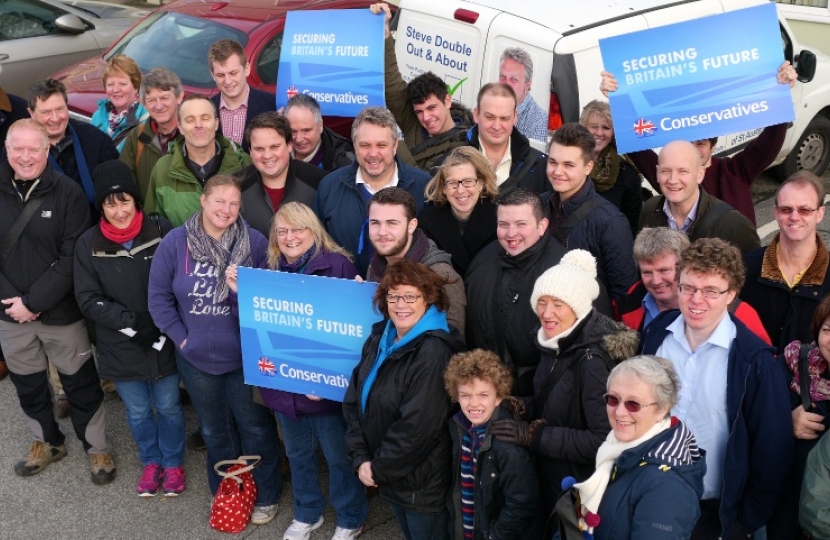 In 2013, it was an honour to be selected as the Conservative Candidate for our constituency and in the two years since then, I have enjoyed talking to many of you who have generously shared your issues and concerns.

With 100 days until the 7th May General Election, you can help to make a difference.  The choice of the future MP for St Austell and Newquay is in your hands.

While other parts of the county have been making good progress, unfortunately we have fallen behind. In our constituency the Lib Dems have shown they are just not up to the job.

You have a chance to end the ineffective representation of the Lib Dems in St Austell and Newquay. You can elect a local person with the vision and determination to work on your behalf for real positive change.

I care passionately about this part of Cornwall. Not only is it where I was born and raised, it is where I have lived and worked my whole life, it is also where Anne and I have raised our own family and I have a deep sense of belonging.

George Osborne and I were recently in Newquay discussing the Conservative’s plans to invest in the South West and specifically mid-Cornwall. Knowing that there is a commitment of billions of pounds to be invested in transport infrastructure, tourism, new businesses and the creation of thousands of better paid jobs, gives me hope for our future.

You cannot risk allowing Labour back into power. They will undoubtedly reverse the investment commitments that the Conservatives have made. They will also undo the work this Government has achieved in repairing the broken economy Labour left behind.

The Conservatives have reduced the deficit, created jobs and reduced unemployment, reduced tax, reformed welfare and created apprenticeships. A vote for anyone other than me as your Conservative candidate will risk allowing the Lib Dems back in here and Ed Miliband into No 10.

There are many ways you can get involved and support my campaign. You can join my growing team of local volunteers who are passionately out every week delivering literature, making phone calls and knocking on doors. Even if you can only spare a hour a month to deliver leaflets in your neighbourhood, together we can make a difference to this area.