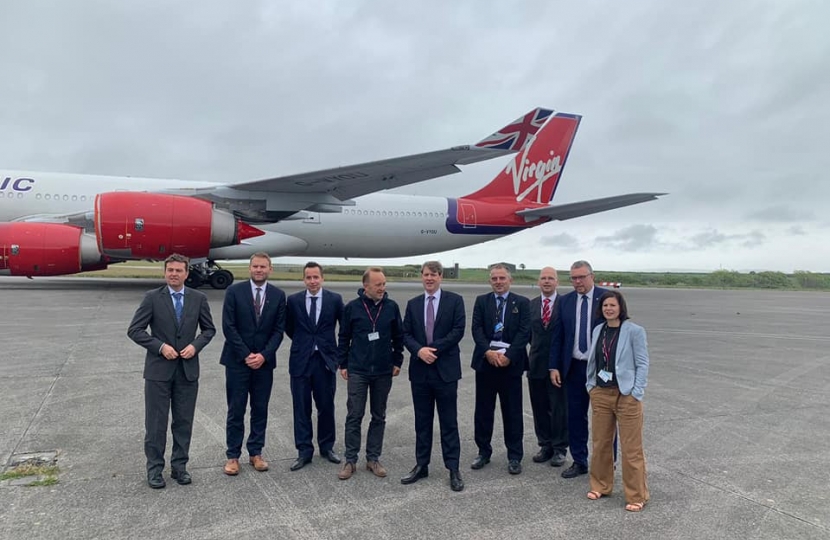 Steve Double, Member of Parliament for St Austell and Newquay, has described the announcement by Defence Secretary Penny Mordaunt today that as part of the MOD’s ambitious space programme, the Government is committing £30m to fast-track the launch of a small satellite demonstrator within a year as a ‘giant leap’ forward for Spaceport Cornwall.

“Today we show the sky is no longer the limit for our Armed Forces with a multi-million-pound investment in the launch of a small satellite demonstrator, supported by a new transatlantic team of defence personnel.”

“In the face of evolving threats from hostile actors in space, we are acting more closely than ever with our international allies through Five Eyes, NATO and now Operation Olympic Defender.”

“Faced with the evolving threats posed by grey-zone warfare, our transformed Strategic Command will provide the structure and coordination our Armed Forces need across all five domains.”

The Defence Secretary also confirmed that the RAF has seconded a member of staff to the Virgin Orbit programme. Virgin Orbit, a major stakeholder of Spaceport Cornwall, is undertaking pioneering research into launching small satellites into space from the wing of a Boeing 747 aircraft from Cornwall Airport Newquay.

Just last week, Virgin Orbit completed a landmark ‘drop test’ of a rocket at 35,000 feet to test the separation of the rocket and aircraft during launch.

“Today’s news is great for Sapceport Cornwall, further demonstration by the Government of their commitment to investing in the exciting plans for Cornwall Airport Newquay, with £30m of funding towards satellite launching, as well as the secondment of staff to Virgin Orbit.”

“Following the recent anniversary of the moon landing, this is another giant leap forward in our journey for Cornwall Airport Newquay to become an integral part of the UK Space Programme and the UK’s first horizontal launch spaceport.”