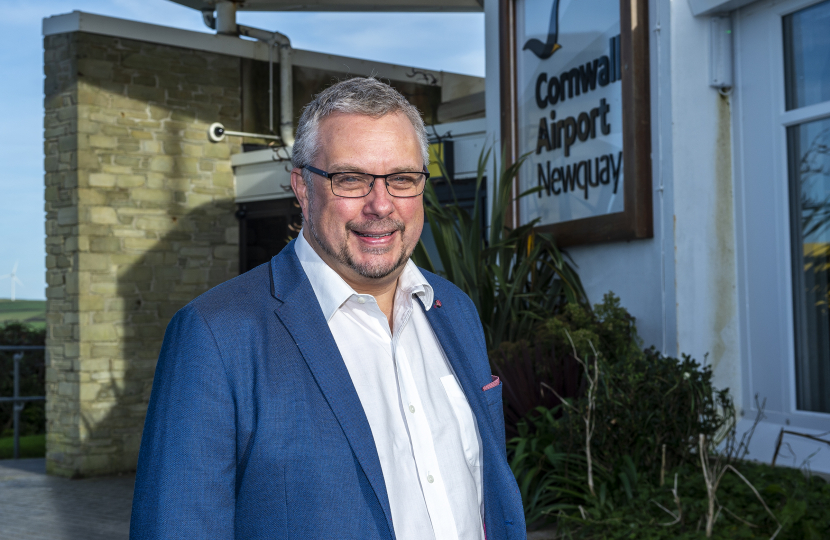 Steve Double, Member of Parliament for St Austell and Newquay, has welcomed the trail-blazing news that will see Cornwall lead the way when it comes to lift-off for the UK’s first satellite launch.

Defence Procurement Minister, Jeremy Quin has today announced that Prometheus-2 will take-off from Spaceport Cornwall in Newquay this summer.

As part of a three-year mission two satellites will operate close to Earth experimenting and test imaging and interoperability.

Steve said: “This announcement is a giant leap for Newquay and the Cornish space sector, and something I have worked hard to make happen since I was first elected in 2015.

“Spaceport Cornwall is not only revolutionising our local economy by bringing in investment and creating well-paid jobs, but has also placed Cornwall at the centre of UK’s space programme.

“Cornwall Airport Newquay is at an exciting place to be right now, and I am looking forward to working with the Government and team at Spaceport Cornwall to see what the future brings following this historic moment, not only for Cornwall, but for the whole of the UK.”

Built by In-Space Missions Ltd and designed with Airbus Defence and Space, Prometheus-2 is a collaboration between the UK Ministry of Defence and international partners, including the US National Reconnaissance Office (NRO).

Two shoebox-sized satellites, ‘Cubesats’, will provide a test platform for monitoring radio signals including GPS and sophisticated imaging, paving the way for a more collaborative and connected space communication system with our allies.

This space mission will allow MOD to better understand how the UK and its international partners can work together to create a more capable and flexible system at a lower cost than could be achieved alone. The technology on board the satellites will enable MOD to identify new techniques and algorithms for operating satellites and data processing.

“This collaboration with In-Space Missions and Airbus paves the way for the UK to become a more resilient, more robust and more significant global space entity.”

NRO Director Dr. Chris Scolose said: “We are thrilled to be part of another trailblazing endeavour with the first-ever launch of a commercial rocket from Western Europe.

“It’s an honour to join the United Kingdom’s Ministry of Defence in announcing this historic enterprise. We look forward to this remarkable achievement as the foundation of an even stronger collaboration between our nations.”

The Cubesats will be carried on Virgin Orbit’s Launcher One rocket which takes off horizontally from a modified Boeing 747 jet, named Cosmic Girl. They will operate in low Earth Orbit, around 550km above the Earth and 50-100km apart at 17,000mph.