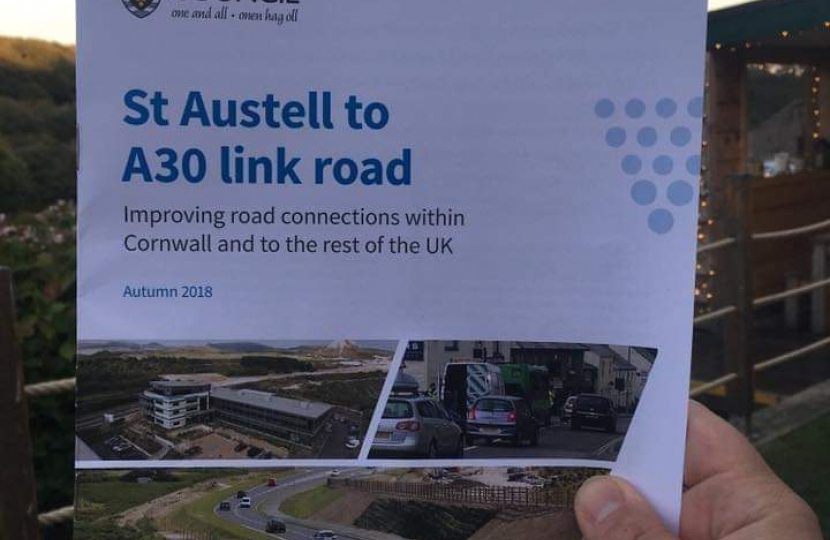 The St Austell - A30 link road has been given the green light after the Department for Transport announced final approval of nearly £80million funding for the scheme.

The major road project is one of four in the country to benefit from £160million Government investment to level up infrastructure and support local communities.

The new link road will be given £78.5million – more than double the amount of funding given to any other scheme and the biggest single investment by any government in mid-Cornwall.

This comes after Steve Double MP for St Austell and Newquay campaigned on the importance of the road for businesses and communities in the area.

Steve says: “Local businesses and residents have wished for a better connection to the A30 for many years. Previous schemes had been cancelled and there had been little prospect of this road ever being built. When I began my first election campaign in 2014 I pledged to make delivering this road my top priority.

“I am delighted the road has now secured the final go ahead from government and this funding represents the biggest single investment by any government in mid-Cornwall. It has been frustrating that the construction of this road has fallen two years behind the original plans, mainly due to the pandemic, but we have finally got there.

“It now means work can begin immediately on providing this vital link. This scheme will not only benefit St Austell and the surrounding area, relieving pressure on Roche, Bugle and Stenalees, but also provide huge economic benefits and a more direct route to the A30 and Cornwall Airport Newquay.

“I am pleased the Government has listened to the representations I have made, along with the transport team at Cornwall Council, and announced the funding we need to make this project a reality.

“It is only under this Conservative Government, with me as your MP, that it has been delivered. I will now continue to work with colleagues in Cornwall and in Westminster to ensure this important part of our infrastructure for Mid-Cornwall is completed as soon as possible.”

The 3.9 mile route will link the A391 at Carluddon with Victoria and provide an alternative route for traffic that currently goes through the villages of Bugle and Roche.

The scheme will generate almost £112million in wider economic benefits, reduce journey times and include a new shared pedestrian and cycle facility running alongside the whole length of the new road.

Transport Secretary Grant Shapps said: “People who live and work around St Austell have long called for this link road, and I’m delighted to confirm that construction can now begin thanks to nearly £80million of Government investment.

“I’ve been working closely with local MP Steve Double, who has long championed this scheme and was instrumental in getting it over the line.

“The new link road will bring more than £112million in economic benefits, reduce journey times and better link St Austell with the rest of Cornwall.”

The road and bridge schemes will level up infrastructure across the country, bolstering employment opportunities, supporting local housing development as well as improving connectivity and journey times.

The works will also include upgraded lanes and paths for cyclists and pedestrians to support low-emission, active travel, working towards the country’s net zero goals.

Roads Minister Baroness Vere said: “We are committed to delivering world-class infrastructure across all parts of the country which supports local economies to thrive.

“This £160 million investment will level up those opportunities from the North East to the South West, while giving motorists, cyclists and pedestrians the modern, safe and uncongested roads they deserve.

“These schemes also present yet another important stepping stone towards cutting emissions and building a clean, efficient road network that is truly accessible to all.”

Construction of the St Austell – A30 link road can now begin.