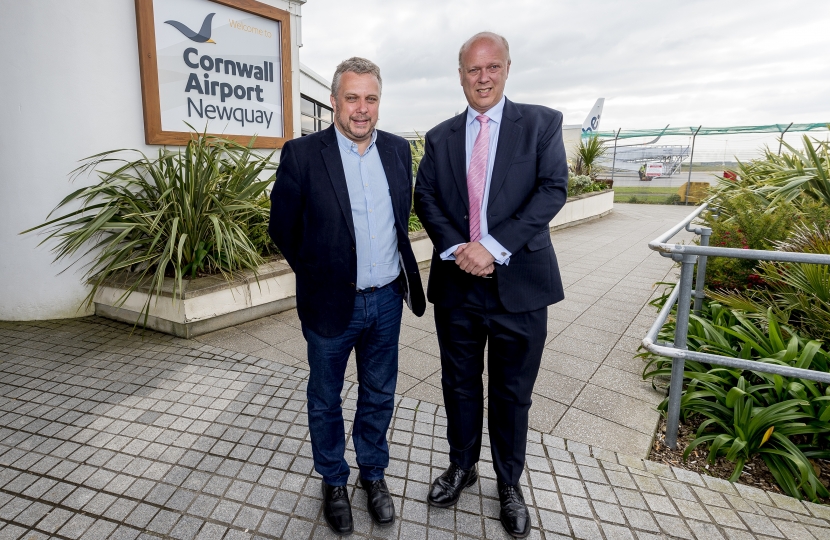 Steve Double, Member of Parliament for St Austell and Newquay, has greeted confirmation by the Secretary of State for Transport today, that the Newquay-Heathrow route will be returning as great news for Cornwall.

“I have talked about… the potential benefits to Newquay airport and the South West of a direct link to Heathrow, once Heathrow expands.”

“I am pleased to say in fact that this link is going to be coming sooner.”

It will be starting in the spring next year, supported by the Government. I think it will provide a really good boost to business in the South West, providing it with connections to important destinations around the world.”

Reacting to the announcement, Steve said:

“This is excellent news for Mid-Cornwall, allowing better connectivity to Cornwall for travellers from around the world, and of course allowing people from Cornwall to quickly and easily access the international air hub of Heathrow.”

“This route will also open up possibilities for the export of Cornish goods through Heathrow which is the UK’s biggest port by value of the goods handled.”

“This is something I have worked hard with Ministerial colleagues to bring to reality and I would also like to thank the Transport team at Cornwall Council for their support.”

“More great news for our airport in what has been a brilliant year for them. This is a great new opportunity for Cornwall which will be up and running from April next year. The airport makes a huge contribution to the Cornish economy and this route will open up new parts of the world for inward investment and tourism.”