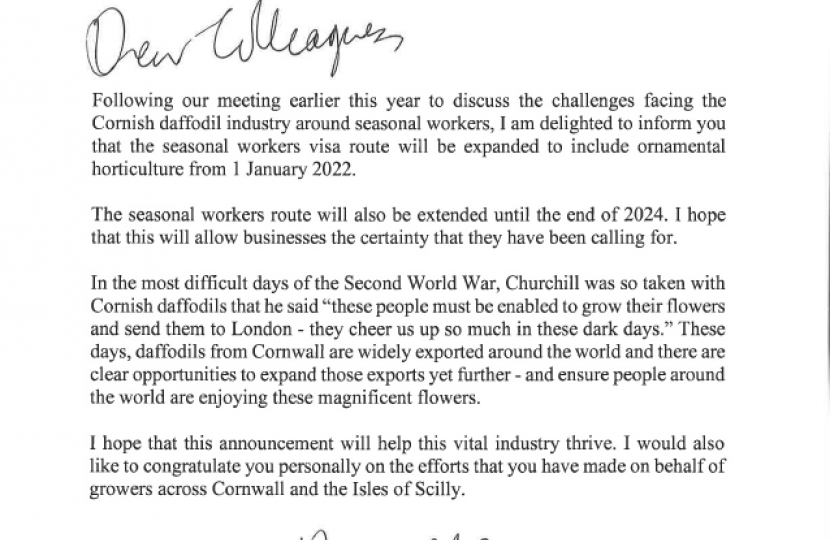 The Prime Minister, Boris Johnson has written to the six Cornish MPs, endorsing both the Cornish daffodil growing industry, and their own efforts to support it by lobbying for its inclusion in the Seasonal Agricultural Workers Scheme.

This comes as the Home Office and DEFRA have confirmed that the Seasonal Worker visa route, which allows foreign workers to come to the UK for up to six months to work in the agriculture and horticulture sectors, will be extended until the end of 2024.

Crucially, the scheme has also been extended to ornamental horticulture to support our distinguished flower growers in the UK, such as Cornwall’s daffodil growers.

St Austell and Newquay’s Member of Parliament Steve Double has been working with the Government to make the case for the changes.

“Cornwall is the biggest supplier of daffodils in the world and this industry is an important part of our local economy. That is why I have been working with our local farmers and their representatives to make the case to the Government for some time. I am pleased to see them listen and put these changes in place ahead of the approaching picking season.”

“It is particularly important that the new scheme will be extended to include ‘ornamentals’ which includes flower farms, including Cornwall’s daffodil crop, which is worth over £100million to the Cornish economy each year.”

“I was pleased to see the Prime Minister’s endorsement of this key Cornish sector, and am grateful for the recognition he gave myself and my Cornish MP colleagues in successfully making the case for this change.”

“I will continue to do all I can to support our vital agricultural sector as we move forwards in order to ensure they thrive, as well as making sure our new immigration scheme works as it should.”

As we work to become less reliant on migrant workers it is important that sectors who relied heavily on foreign workers are given time to adjust and transition into attracting more local workers. The Seasonal Agricultural Workers Scheme provides the support this sector needs for the coming years.

DEFRA will be bringing forward further proposals in due course on ways to support the sector as well as progressing recommendations in the Automation Review.