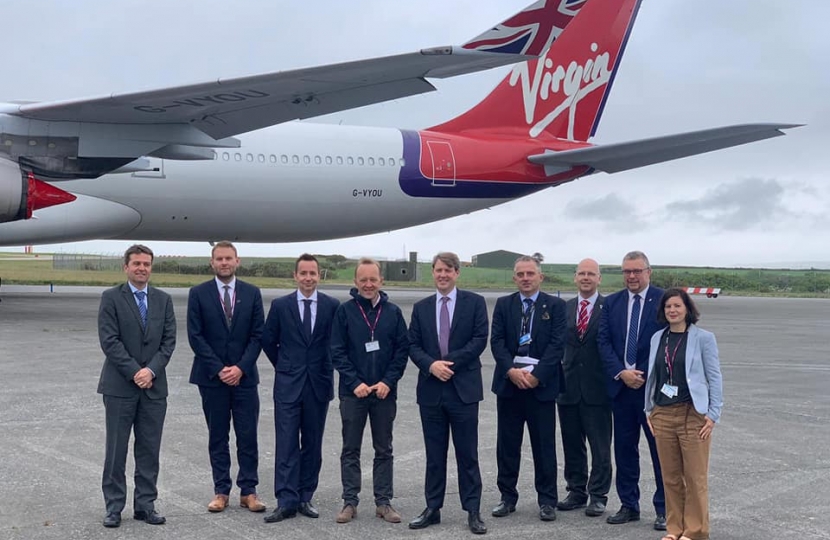 Science Minister Chris Skidmore has seen first-hand how Cornwall and the South West can play a major role in the UK’s ambition to capture 10% of the global space market by 2030.

The Minister then took part in a round-table discussion chaired by Cornwall Council deputy leader Adam Paynter with space industry leaders, which looked at the wider economic opportunities of the space sector in the South West.

By visiting Cornwall Mr Skidmore was fulfilling a pledge he made to St Austell & Newquay MP Steve Double during a Commons debate about the space industry in March.

Commenting, Steve Double, who accompanied the Minister on the visit, said:

“I am pleased the Minister has come to Cornwall to see for himself the potential of Spaceport Cornwall and the tremendous level of support and enthusiasm we have from all sectors in Cornwall. We are well placed to be the location of Europe’s first horizontal launch spaceport and I am sure the Minister will have gone away with a very positive message that we are ready for lift off at Newquay."

“This also comes hot on the heels of the recent announcement of the £2m Horizontal Spaceport Development Fund, which I am sure we are ideally situated to bid for. I will continue to work with him and the UK Space Agency, Cornwall Council, the LEP and Virgin Orbit to make this a reality.”

“There has never been a better time to start and grow a space business in the UK, and I believe Cornwall and the South West can play a big part in the new commercial space age."

“Through our modern Industrial Strategy, the space industry is lifting off in the South West and I was delighted to come to Cornwall to meet businesses, tour the impressive facilities at Cornwall Airport Newquay and speak with local industry leaders.”

Commenting, Glenn Caplin, Chief Executive of the Cornwall & Isles of Scilly Local Enterprise Partnership, which is investing £8.4m in Goonhilly and funding the work to establish Spaceport Cornwall, said:

“Developing the space economy in Cornwall is a cornerstone of the LEP’s emerging Local Industrial Strategy. We welcomed the opportunity to brief the Minister on the contribution our area can make to the UK’s space ambitions and economic growth, locally and nationally.”

Last year Cornwall Council signed a partnership agreement with Virgin Orbit to bring the company’s horizontal satellite launch system to Spaceport Cornwall. This would complement vertical launch activity proposed for Scotland, meaning the UK can offer both systems to the global space industry.

Steve Double, Member of Parliament for St Austell and Newquay has welcomed confirmation from the Department for Transport that the Government backed London-Newquay air route will be recommencing on 24 July.