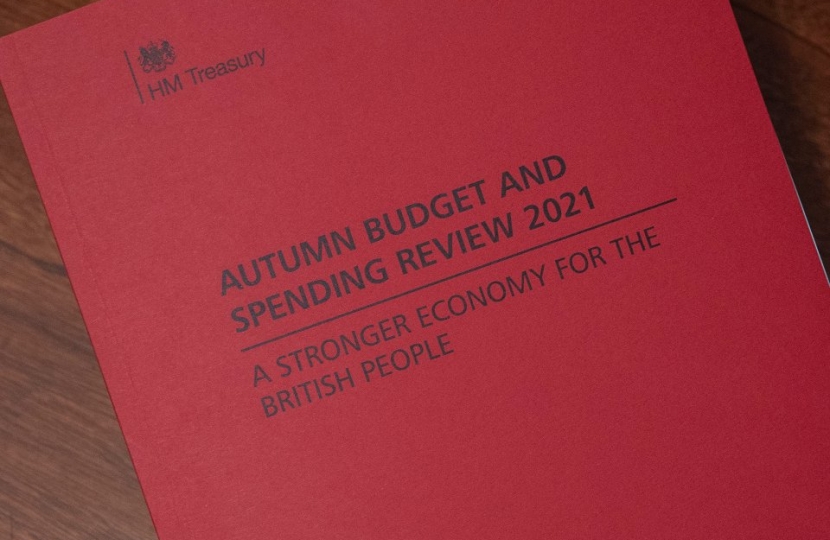 Today’s Autumn Budget will deliver the full economic recovery we all want to see.

We are already recovering faster than many of our major competitors - with far more people in work and strong economic growth reported. The measures set today will help us go even further by:

✓ Cutting tax for low-income families by reducing the Universal Credit taper rate – a tax cut for 2 million families worth an extra £1,000 in their pockets next year, totalling £2.2 billion

✓ Increasing the National Living Wage by 6.6 per cent to £9.50 – raising the pay of 2 million of the lowest paid workers

I was especially pleased to hear a number of measures I have lobbied the Government on are being brought in:

✓ Cut to beer duty – This had been frozen for a number of years, but we are now cutting it by 5% for draught cider and beer. This means a permanent cut in the cost of a pint by 3p. This is the biggest cut to beer duty for 50 year and cider duty for nearly 100 years. Taken together this will boost British pubs by nearly £100 million.

✓ Cut to Air Passenger Duty for domestic flights and further support for regional airports – Currently, people flying within and between the four nations of the UK pay the same duties as international flights, and this places us at a competitive disadvantage. From April 2023, duty on domestic flights within the UK will be cut by half for 9 million passengers. Regional airports like Cornwall Airport Newquay will also be able to benefit from a 6 months’ extension of businesses rates relief to help manage costs.

✓ Cut to retail, hospitality, and leisure business rates by at least 50% for 90% of the sector next year – Any eligible business such as pubs, gyms, cinemas, restaurants, and hotels can claim a 50 per cent discount on their bills, up to a maximum of £110,000 per business. This is the biggest business rates cut in 30 years and comes on top of the £16 billion already put in place for the sector.

I was also pleased to hear that Cornwall is receiving £200 million of new funding to continue the Cornwall and Isles of Scilly investment fund which has helped countless small businesses across Cornwall access the finance they need to grow and flourish.

The Chancellor also used the Budget statement to again reaffirm that the £2.6 billion Shared Prosperity Fund which replaces the EU Structural Fund will “at a minimum match the size of EU Funds in each nation and in Cornwall, each year.” The fund will be easier to access and better tailored to meet local needs, enabling us to directly invest in and support people, communities, and local businesses in Cornwall.