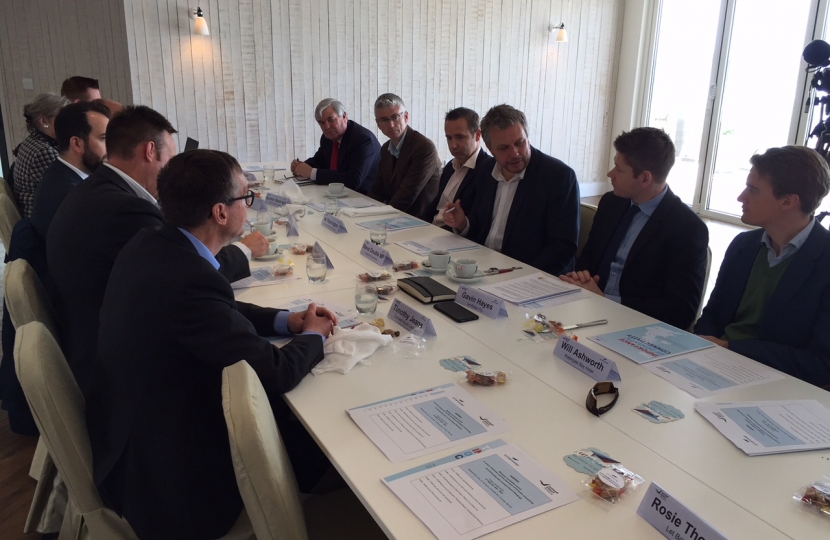 Steve Double, MP for St Austell and Newquay, chaired a discussion last Friday (April 29th) on the urgent need for a new runway in London, highlighting how Cornwall’s connectivity to the rest of the world could be transformed by the decision.

Held by organisation Let Britain Fly at Watergate Bay Hotel, the meeting included representatives from Cornwall Airport Newquay, Cornwall Council and the business sector. With Heathrow already at full capacity, and projections that Gatwick will be full by 2020, if not before, the group discussed the need for the Government to urgently make a decision on where to build the new runway. A third runway at Heathrow was last year recommended as the preferred option by The Airports Commission.

Opening the event, Steve Double stressed the issue of airport expansion is not just about London, but one that affects the whole nation and should be considered as such.

He said: “There is a degree of frustration around the delay in the Government’s decision, I believe a prompt decision on airport expansion is vital. Making the right decision on where to expand will not only decrease the pressure being put on capacity across the London network, but deliver many benefits to Cornwall.”

It is believed expansion at Heathrow – the UK’s only international hub airport – could bring a connection between Heathrow and Newquay and in turn, boost the county’s tourism sector with more international visitors travelling to the region, as well as further improving business links with both the capital and international markets.

Speaking after the discussion, Steve added:

“I was delighted to chair this meeting on behalf of Let Britain Fly. I thought it was a very successful event which gave people the opportunity to discuss the importance of such airport expansion and what it would mean to them. It was also useful to help make absolutely clear how important Cornwall Airport Newquay and regional connectivity is to the continued growth of the county.

“It is no secret that my discussions with the Aviation Minister Robert Goodwill are ongoing and I continually press for when a decision on this will be made. It is very important that Cornwall’s voice is heard and it is considered that a prompt decision will help the region boost jobs and economic growth.”