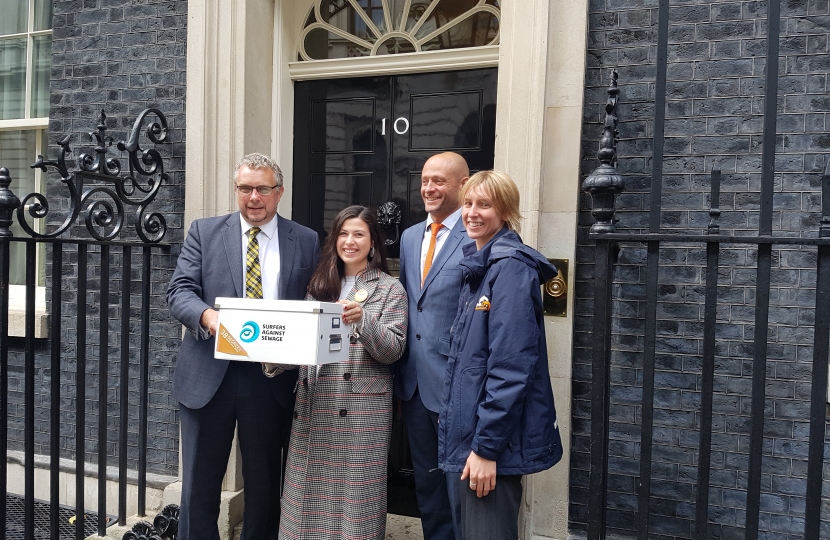 Steve Double, Member of Parliament for St Austell and Newquay has today joined with Surfers Against Sewage and other campaigners in presenting the Message in a Bottle petition to Number Ten Downing Street.

In his capacity of Chair of the Protect Our Waves All Party Parliamentary Group, Steve has been campaigning to get the Government to bring in a deposit return scheme for single use plastic bottles.

The harmful impacts from plastic pollution can continue to damage the oceans for hundreds of years. A third of fish currently caught in the UK have plastics in their guts and the average UK seafood eater consumes 11,000 plastic particles annually.  Strong and effective action to protect our oceans from plastic pollution is urgently needed and the introduction of a deposit return system would prevent an estimated 4 million plastic bottles from entering the oceans every week in the UK.

The Surfers Against Sewage ‘Message in a Bottle’ petition, quickly captured the attention of the public with 150,000 signatures collected in the first month.  Now, with nearly 250,000 signatures it is the largest deposit return system petition to be submitted to the Government.

“As Chair of the All Party Parliamentary Group Protect Our Waves I am delighted to join Surfers Against Sewage to hand in the Message in a Bottle Petition to Downing Street today.”

“It is great to see such vast public support for the campaign to introduce a plastic bottle deposit return scheme, which I hope will fuel the growing support from within the Government.”

“With government, the drinks industry and environmental campaign groups all agreeing that a return scheme is one of the best ways of reducing the amount of plastic polluting our seas I see no reason why this will not now happen.”

“We’re delighted to see the overwhelming public support for the introduction of a deposit return system to tackle ocean plastic pollution. Society’s plastic addiction has reached crisis point and we need to fast-track proven and effective systems including deposit returns to protect our oceans and beaches from the scourge of plastic pollution.”

“Surfers Against Sewage is today proud to deliver the voice of quarter of a million supporters to urge the government to follow Scotland’s lead and commit to introducing a comprehensive plastic bottle deposit return system.”