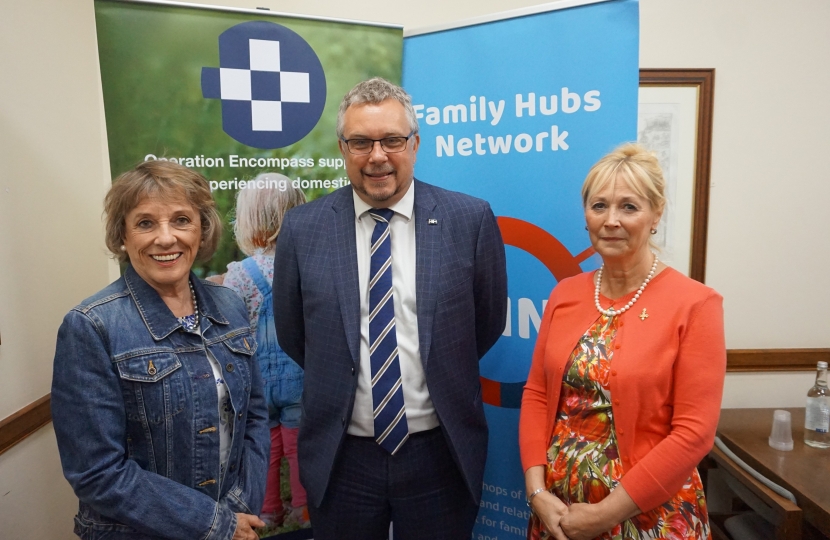 Steve Double, Member of Parliament for St Austell and Newquay has met with Cornish Headteacher Elisabeth Carney-Haworth and Operation Encompass, a charity that helps protect children from the consequences of domestic abuse.

Operation Encompass directly connects the police with schools to secure better outcomes for children who are subject or witness to police-attended incidents of domestic abuse. Rapid provision of support within the school environment means children are better safeguarded against the short-, medium- and long-term effects of domestic abuse.

In September last year the Home Office awarded the charity £163,000 to support the roll-out of the initiative to every police force in England and Wales. The award also allowed the charity to carry out an audit of existing systems and the effectiveness of the supportive interventions in place for children.

Steve met with Dame Esther Rantzen and David and Elisabeth Carney-Haworth, both recently awarded the Order of the British Empire (OBE) for their work safeguarding children from domestic abuse with this project.

“I am proud to say that the Conservative Government’s landmark Domestic Abuse Bill was introduced to the Commons on July 16. This legislation includes a definition of domestic abuse to include “emotional” and “economic” abuse for the first time, and is aimed at making it easier to prosecute perpetrators and provide more support for victims.”

“It is very unfortunate however, that Operation Encompass is not - as yet - a statutory obligation by the police nor any educational establishment, and despite the urging of the Her Majesty's Inspectorate of Constabulary and Fire & Rescue Services to embed the scheme in each police force, there are still areas of the country where this scheme has not been taken up.”

“I have discussed this matter with Dame Esther, David and Elisabeth today at our meeting in the House of Commons, and I feel strongly that we should see this scheme firmly put in place in our own constituency. In particular it is good to see Elisabeth’s experiences as a Cornish headteacher used so well in bringing together this project.”

“As a result of my meeting, I shall be contacting the Devon and Cornwall Constabulary Chief Constable Shaun Sawyer, as well as our force’s Police and Crime Commissioner Alison Hernandez to discuss the matter.”

“Domestic abuse and the harm it causes our children is a priority for this Government and I feel all our children should have access to the support they need and deserve from this fantastic scheme.”