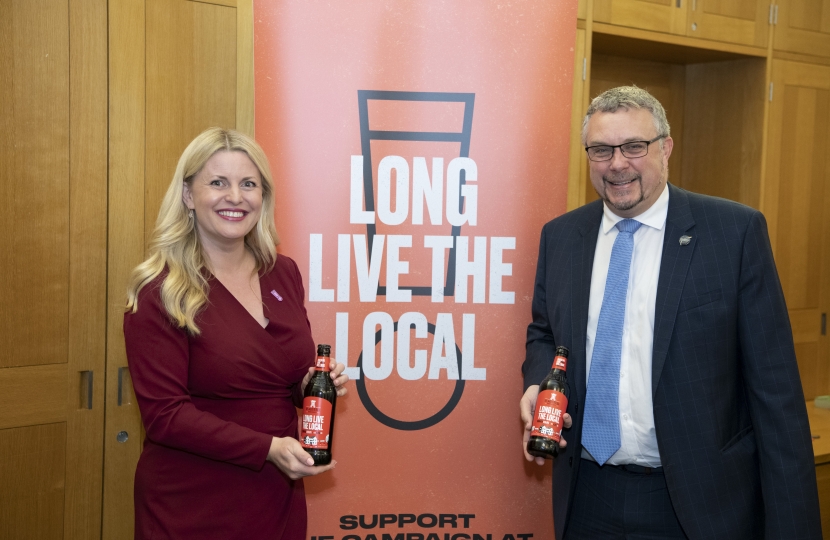 Steve is calling on the Government to cut beer tax at the Budget. With £1 in every £3 pounds spent in UK pubs going to the taxman, British drinkers now pay 40% of all beer tax across the EU, but drink only 12% of the beer. Seven in ten alcoholic drinks served in pubs are beer, underlining how directly a cut in beer duty will help pubs. Brewing and pubs in St Austell and Newquay supports 2841 jobs and contributes £104.5m to the local economy.

“This campaign is one I have supported since I became MP and this year I was delighted to have St Austell Brewery as the brewer for the small batch of ‘Long Live the Local’ Cornish Red IPA, flying the flag for Cornwall and Cornish pubs, as a leading voice of this campaign.”

“Pubs are at the heart of communities across St Austell and Newquay, but with three British pubs closing their doors for good every day the Government should consider a cut to beer tax. I’m supporting the Long Live the Local campaign and calling on the Chancellor to cut beer tax at this year’s Budget to support pubs in our local communities.”

“Beer duty has increased by 60% over the last 17 years and now the UK has one of the highest rates of tax in Europe. When over two thirds of all alcoholic drinks purchased in the pub are beers, a cut in beer tax would go a long way to protecting pubs across St Austell and Newquay. We are very grateful to Steve Double for their support for the Long Live the Local campaign, and hope that the Government listens to MPs across Parliament and the thousands of people across the country who are calling for a cut in beer tax to protect our pubs.”