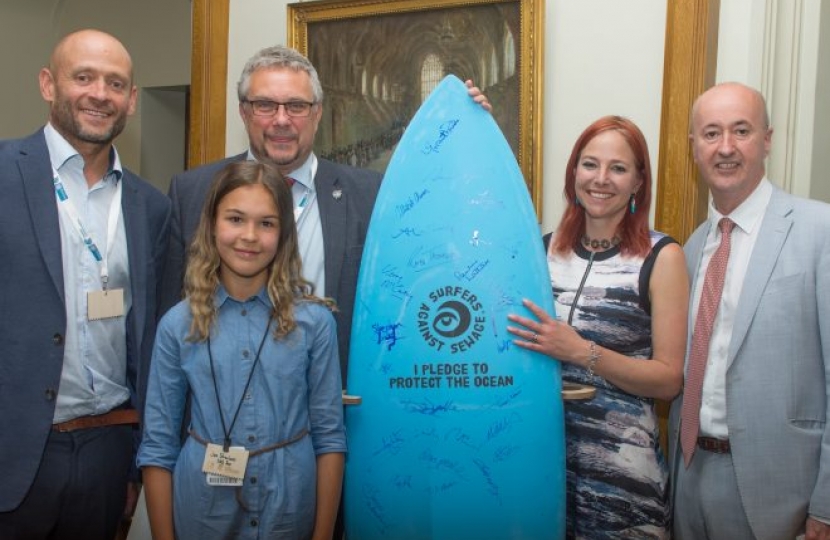 Steve Double, Member of Parliament for St Austell and Newquay was yesterday re-elected as Chair of the All Party Parliamentary Group for Ocean Conservation.

The Ocean Conservation APPG brings together a broad cross-party coalition of MPs who share an interest in marine conservation issues and often, but not exclusively, represent important coastal communities around the UK, leading engagement with MPs, ministers and the government in relation to threats to the UK’s marine habitats and the best ways to protect and promote these increasingly important areas.

Surfers Against Sewage acts as the secretariat for the group, briefing and informing its members and providing the admin support for the group.

The APPG has been a highly effective body in recent years in raising awareness of issues such as plastic pollution of our oceans and lobbying government to take action. This has included the plastic free Parliament campaign.

“I am delighted to again be elected as Chair of the APPG for Ocean Conservation.”

“There has never been a time where it has been so important to look after our marine habitats. We accomplished so much in the last Parliament and I look forward to continuing to work with colleagues from across Parliament and Surfers Against Sewage to lead the charge for positive change.”

Steve Double, Member of Parliament for St Austell and Newquay has welcomed today’s announcement by Chancellor Rishi Sunak that Charities across the UK will receive a £750 million package of support to ensure they can continue their vital work during the coronavirus outbreak.