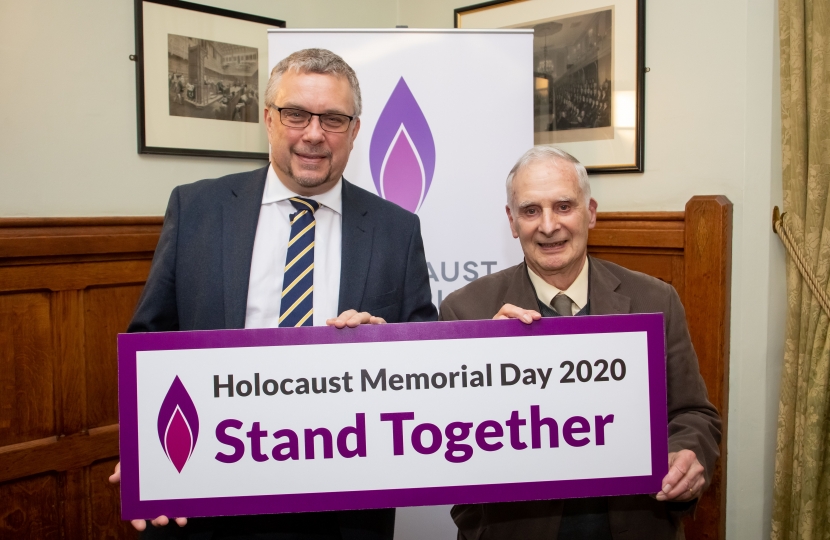 Steve Double, Member of Parliament for St Austell and Newquay, joined survivors of the Holocaust and more recent genocides and politicians at a reception in Parliament to mark the launch of a new digital campaign urging people to ‘Stand Together’ and commemorate the lives of individuals murdered by the Nazis.

The campaign, launched by the Holocaust Memorial Day Trust, pairs people with the name of a person murdered by the Nazis, which they can share on social media in a digital act of remembrance. Names of Jewish people murdered, alongside Roma, gay, disabled people and other groups are included in the project.

The Stand Together project reflects the theme chosen for Holocaust Memorial Day 2020, which explores how genocidal regimes have deliberately fractured societies by marginalising certain groups, and how these tactics can be challenged.

Attendees at the event heard remarks from Olivia Marks-Woldman, Chief Executive of Holocaust Memorial Day Trust, and Rachel Levy BEM, a survivor of the notorious Auschwitz and Bergen-Belsen concentration camps.

Ms Levy, who was able to evade the Nazis for two years by being hidden in the forest in what was then Czechoslovakia aided by non-Jewish neighbours, was sent to Auschwitz in 1944 and only narrowly escaped being sent to the gas chambers.

Speaking at the event, she told MPs:

Holocaust Memorial Day is the annual day of commemoration of the Holocaust, Nazi Persecution and more recent genocides in Cambodia, Rwanda, Bosnia and Darfur.

“I was moved to attend the event in Parliament to commemorate the 75th anniversary of the liberation of Auschwitz. These terrible events must never be forgotten. They are just as relevant today as they were 75 years ago as stark reminders of the horrors of Nazi Germany and why we must do all we can to stand against such horrific politics today.”

“With increasing division in communities across the world and here in the UK, now more than ever we need to stand together with others in our communities to challenge the spread of identity-based hostility. Our Stand Together project is a powerful way for us all to remember people murdered by the Nazis – as individuals with their own hopes, families and friends. It is a chance to restore their human dignity and remember where hatred can lead, and why we must all act to challenge it. Holocaust Memorial Day is an important opportunity for us all to learn from genocide, for a better future, and I’d urge everyone to get involved in activities for Holocaust Memorial Day 2020 by visiting hmd.org.uk.”