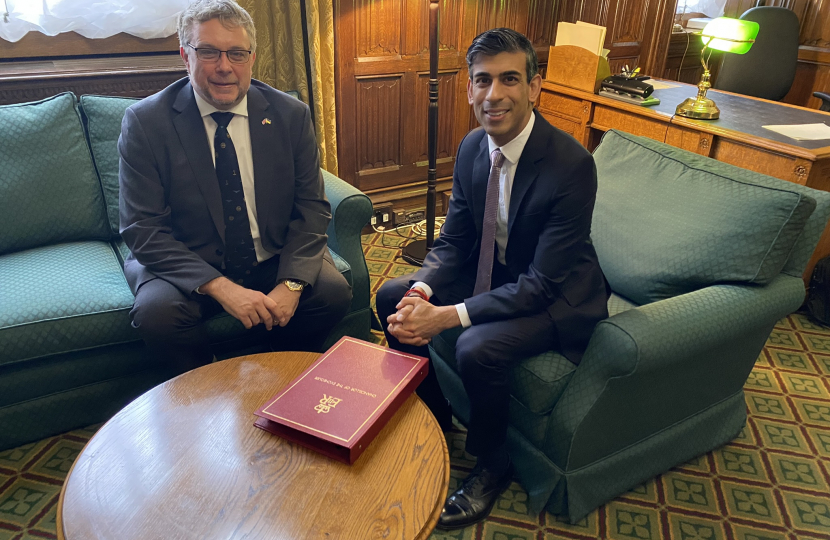 The Government has today announced a new £15 billion emergency package to further help people through the cost of living crisis.

MP for St Austell and Newquay, Steve Double, has welcomed the new measures revealed by the Chancellor to tackle the biggest squeeze on living standards in decades.

The measures, which will help the most vulnerable, include:

All bill payers will get a minimum of £400, the majority of households will receive £550.

The package will partly be funded by a new temporary Energy Profits Levy on oil and gas companies who are not investing in the UK energy market. This will raise around £5 billion to help families with the cost of living.

“This is a significant package of support which will help all households, and rightly targets the most help at those who need it. The Government has stuck to its promise that as the situation evolves our response will evolve.

“The Chancellor said he would consider what further support we could provide once we knew what the increase in energy prices coming in the Autumn would be. This week Ofgem announced the new price cap for October and I am pleased the Chancellor has wasted no time in announcing this significant package of support today.

“We recognise that we must once again do everything we can to help people through these challenging times and this targeted action will particularly help those who are hard-pressed.

“I know the Government will continue to monitor the impact of the cost of living over the coming months and ensure people receive the help they need during these unprecedented times.”

The Government is now providing a total of over £37 billion worth of support to help families with the cost of living.

The package includes a £650 cost of living payment for every household on means-tested benefits. This means over 8 million of the most vulnerable households will be directly sent a one-off cash payment of £650, paid out from the DWP in two separate instalments, with the first due from July and the second in the Autumn.

Payments from HMRC for those on Tax Credits will follow one month later. All those who live in the UK and are in receipt of Universal Credit, Jobseekers Allowance, Employment and Support Allowance, Income Support, Working Tax Credit, Child Tax Credit and Pension Credit are eligible.

A £150 disability cost of living payment for those in receipt of disability benefits. For the nearly 6 million people who receive disability benefits – including Personal Independence Payments, Disability Living Allowance, and Attendance Allowance – there will be an additional one-off cash payment worth £150, paid out from DWP in September. This will help to pay for the higher costs often faced by those who require special equipment in their households.

An additional £500 million is also being providing for the existing Household Fund from October, to ensure local councils can support those not covered by the above set of payments. Local councils will continue to have discretion over exactly how the funding is used.

Chancellor Rishi Sunak said: “This Government will not sit idly by while there is a risk in this country that some could be set so far back they will never recover. This is simply unacceptable, and we will never allow that to happen.

“We have a responsibility to help those who through no fault of their own are paying the highest price.

“They will feel some of the burden eased, some of the pressure lifted and they will know this Government is standing by them.”

The new living support package is in addition to the £22 billion measures announced already this year by the Government, which include:

The measures form part of the Government’s plan for a stronger economy which will create jobs, cut taxes on working people, reduce borrowing and debt, encourage businesses to invest and innovate, and level up the UK.