Steve Double: “New package of support for farmers will boost agricultural sector through Brexit and beyond!” 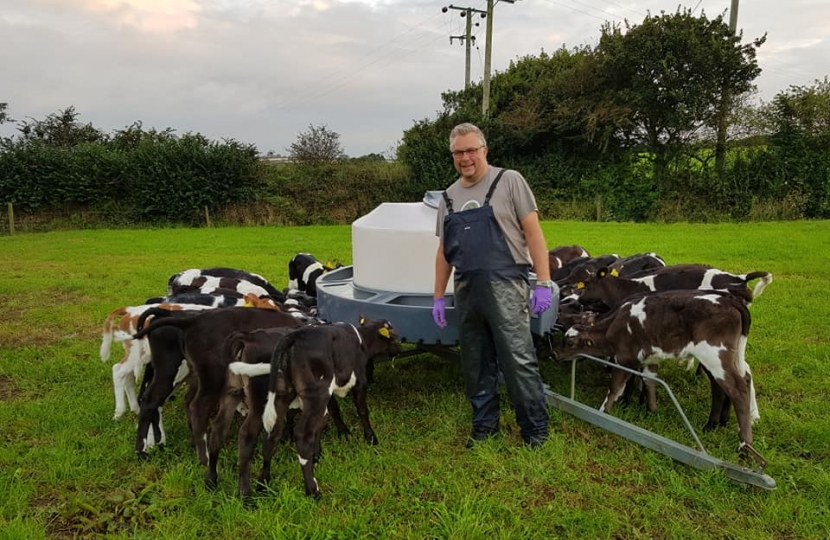 Steve Double, Conservative Parliamentary Candidate for St Austell and Newquay has welcomed the news that the Conservative Party has committed to protect funding for British farmers, enabling them to take full advantage of the opportunities of Brexit.

In a significant boost to the farming sector, a Conservative majority government would match the current annual budget available to farmers across the UK in every year of the next Parliament.

“During my time as MP since 2015 I have been sure to regularly spend time meeting with the NFU, individual farmers and mucked in for the day to see for myself what the challenges are that farmers face day to day.”

“With this in mind it is good to see that the Government has taken onboard the feedback made by myself and other Conservative MPs in bringing forward this positive package of measures to support and boost the agricultural sector through Brexit and beyond.”

“If re-elected I will continue to work closely with our Cornish farming community to ensure its voice continues to be heard in Westminster.”

In England, this funding will support farmers as they move away from the EU’s bureaucratic, unfair and environmentally-damaging Common Agricultural Policy. The CAP will be replaced by new schemes to support farmers in their work to care for the environment, improve animal welfare, and provide other “public goods”. Improvements in productivity and overall sustainability will also be rewarded. A 7-year transition will help ensure farmers have time to plan and adjust.

Ministers are also announcing the Conservatives will use the opportunity of leaving the EU to encourage the public sector to “Buy British”, in recognition of the quality of British food and in order to reduce our carbon footprint.

“Brexit provides a huge opportunity to transform British farming. By leaving the discredited Common Agricultural Policy, we can help British farmers become more productive at the same time as improving our natural environment.

“I am delighted to announce that a Conservative majority government would guarantee to match the current annual budget available to farmers in every year of the next Parliament. This gives farmers the reassurance they need to plan for the future.

“It’s only by getting Brexit done and that we can create a bright new future for farming. The last thing farmers need is the prolonged uncertainty and chaos of two more referendums under Labour.

“Our new Environmental Land Management system to replace the CAP is a flagship environmental reform which will be crucial in our efforts to reverse the decline of nature and biodiversity and achieving our long term goal to ensure this is the first generation to hand on the natural environment in a better condition than we inherited it. This funding announcement provides a massive step forward in enabling us to deliver this reform successfully.”