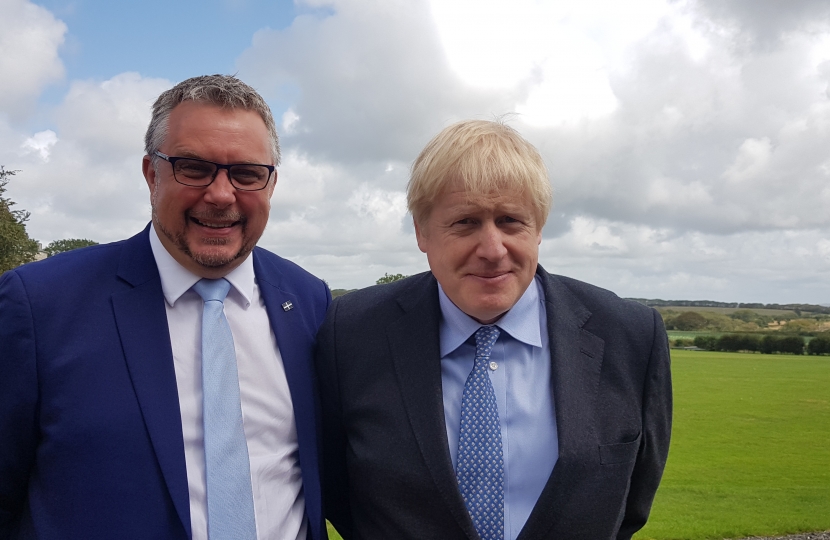 Steve Double, Conservative Parliamentary Candidate for St Austell and Newquay, has welcomed the news that the scourge of poor mobile phone signal in rural areas will be a thing of the past under bold new plans to be fast tracked in the first 100 days of a Conservative majority government.

Currently only 66 per cent of the UK landmass has geographic coverage for customers of all four network operators. This will rise to 95 per cent or more under our plan.

In our first 100 days, a Conservative Majority Government will finalise a £1 billion agreement with mobile phone operators to pool existing phone masts, and build new ones, bringing dramatically improved mobile service to the countryside.

Visiting Cornwall yesterday, the Prime Minister Boris Johnson has set out plans for a “Shared Rural Network” which would see new masts built and existing infrastructure shared between the four mobile phone providers – 02, Three, Vodafone and EE. This would ensure 4G service, for all customers, regardless of their provider, across almost all of the UK, virtually eradicating the not-spots that exist in some rural areas – where “No Service” plagues mobile phones.

Areas that have coverage from only some of the four providers - partial not-spots - will also be almost entirely eliminated.

This agreement would be the first of its kind around the world and would mean consumers will be able to connect to 4G coverage, wherever they live, travel or work - regardless of their network provider. This transformative fund will see additional coverage to 280,000 homes and businesses and 16,000km of roads. It will significantly improve life for the 9.3m people living in the countryside.

The operators will pay up to £530 million to get rid of partial not-spots. A Conservative majority government will add a further £500 million to build new infrastructure in rural areas that are not commercially viable, providing near-universal coverage. We will also upgrade our emergency service network in the countryside to open it up for consumers, with no loss of capacity for the emergency services.

This builds on a raft of commitments by this Conservative Government to ensure that rural areas are not left behind, including £5 billion to accelerate the rollout of the highest-speed internet across the country – eradicating the digital divide, boosting regional economic growth and improving productivity.

“During my time as Member of Parliament for the St Austell and Newquay constituency we have made some great progress in getting Cornwall better connected, both in terms of physical transport infrastructure but also in improving digital infrastructure such as mobile phone signal and broadband speeds.”

“Yet there are always the dreaded mobile phone not-spots in some areas, such as Fowey, Pentewan and St Mawgan which need a combined strategic approach to help eliminate.”

“I am delighted to see this strategy come forward, should a Conservative majority government be returned, and if re-elected after the General Election on 12 December, look forward to getting rid of these not spots once and for all.”

“Mobile phones are revolutionising our day-to-day lives and are crucial for businesses as they compete and grow. We are determined to make sure that no part of the country is left behind when it comes to mobile connections.”

“If a Conservative majority Government is elected, in our first 100 days we will fast track agreements for mast sharing between networks, alongside new investment in mobile infrastructure to tackle rural not-spots by 2025 and make poor mobile signal a thing of the past.”

“These plans underline the choice at this election – Vote for the Conservatives on 12th December so we can get Brexit done, focus on our schools and hospitals, and deliver better mobile and digital coverage to rural areas. Or Vote Jeremy Corbyn for more Brexit delay and the chaos of two more referendums preventing progress on anything else.”