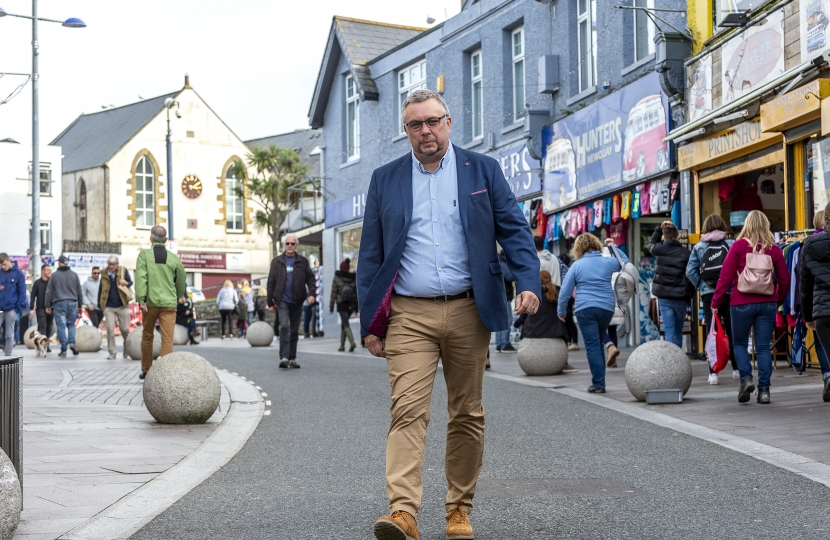 Steve Double, Conservative Parliamentary Candidate for St Austell and Newquay, has welcomed the pledge from the Secretary of State for Communities that a Conservative Government will help high streets, shopping parades and corner shops.

New local analysis shows how business rates are to be cut for shops across England:

Cutting the costs of hiring shop staff: Conservatives are also pledging to cut the “jobs tax” on hiring staff. Shops pay National Insurance on their employees’ earnings. The Employment Allowance will be raised from £3,000 to £4,000, which will provide a tax cut of up to £1,000 for more than half a million businesses. This will amount to almost a half a billion-pound tax cut for small firms.

Helping shops renovate premises: On top of this, taxes will be cut on doing up shops’ premises. Since 2018, the Structures and Buildings Allowance gives tax relief to businesses on the purchase, building or leasing of a structure. It includes renovation, repair and conversion costs, and fitting out works. Conservatives will increase the allowance from 2 to 3 per cent, to give a significant boost to investment in shops’ premises.

New government funds to support towns: On top of tax cuts, a £3.6 billion Towns Fund will go to an initial 100 towns to improve their local economy and support their town centres. A new Safer Streets Fund will invest in preventative measures like new CCTV or community wardens. And to boost new civic infrastructure, the largest cultural capital programme in a century will provide £250 million to help local libraries and regional museums.

“The Conservatives have always been the party of business and it is clear that under a future Conservative Government, businesses will be better off. These measures will boost our many small businesses in Mid-Cornwall and as a result enhance and grow the communities they are located in.”

“Local shops are at the heart of our communities, but have faced tough competition from the rise in online shopping. We will cut taxes on local shops – so they pay less in business rates, reduce job taxes and make it cheaper to do up their properties.”

“A Conservative majority government will get Brexit done immediately, and unleash Britain’s potential. We will stand up for the parts of our county and community which have been left behind.”