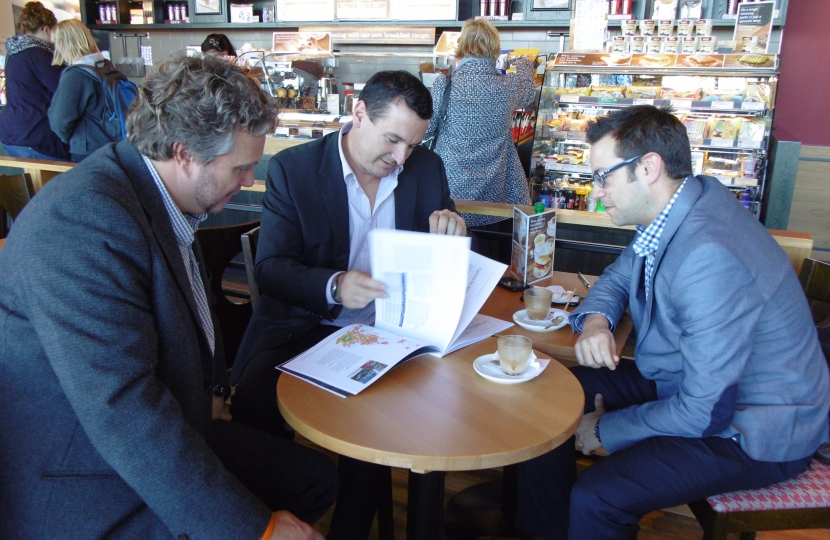 Steve Double, the Prospective Conservative Parliamentary Candidate for St Austell and Newquay, met recently with Nigel Milton and Graham Elliot from the team at Heathrow Airport to re-iterate his support for the proposed third runway.

The management team at Newquay Airport has long seen the advantages that a third runway at Heathrow would provide for the South West. The team at Heathrow has stated that should they get the go-ahead they will make slots available to regional airports and have named Newquay as one of the airports that they would support.

Commenting before the meeting Steve said – “I am already on record as stating that I believe the expansion of Heathrow would be good news for Newquay Airport and Cornwall as a whole and I welcome this opportunity to offer my support again.

Although the support of the Conservative-led Government for the link to London via Gatwick is good news in the short term, we need to think about the long-term commercial viability of Newquay Airport.

It is clear to me that Cornwall not only needs to be connected to the capital but also to the rest of the world. Heathrow is the UK’s primary hub for international flights and a direct link to Heathrow would provide the connections Cornwall needs to attract businesses here.”

After the meeting Steve commented, “I was pleased to be able to meet with members of the Heathrow team and listen to the steps they have been taken to address some of the concerns and objections to the third runway in London.”

‘I recognise that the issue of the third runway at Heathrow is not clear-cut and have assured the team of my continued support.  I also promised to press the case with my Conservative colleagues and to point out to them that this decision should be about what is best for the UK as a whole and not just for London. I will always work for what is right and best for Cornwall.”