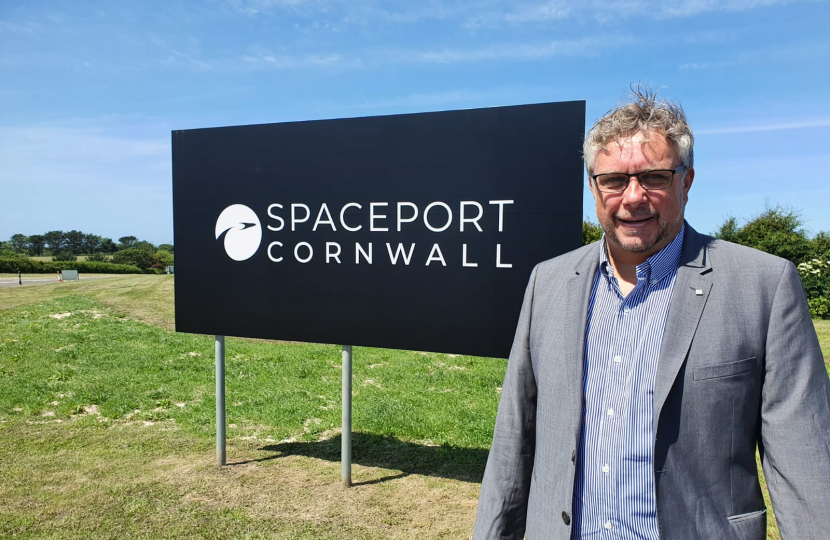 Virgin Orbit’s next satellite launch will take place from the UK, following the success of the “Straight Up” mission, which lifted off from Mojave in California at the weekend.

“Having only recently met with the CEO of Virgin Orbit, Dan Hart, in Parliament, I am delighted to see their continued success in this area, as we move forward to preparations for launch from Spaceport Cornwall.

“We are now within reaching distance of this colossal achievement not just for Cornwall, but for the whole of the UK, and I look forward to the final push towards lift off in the coming months.”

“Congratulations to Virgin Orbit on another successful US mission, which demonstrates the ability of its innovative launch platform to put satellites into orbit day or night. With the countdown on to the first satellite launch from UK soil, it’s incredible to see Cosmic Girl and LauncherOne in action before they head to Spaceport Cornwall.

We are in a strong position to capitalise on the growing global demand for small satellite launch and to do so in a way that will keep space and our planet sustainable for future generations.”

Matthew Archer, Director of Commercial Spaceflight at the UK Space Agency, who joined the Virgin Orbit team for the launch from the Mojave Air and Space Port, said:

“The success of the Straight Up mission is another exciting milestone on our way to seeing the first satellite launch from UK soil. We are working closely with Virgin Orbit and it was a privilege to be alongside our partners to witness another successful launch for the team.

The UK is home to some of the world’s leading satellite manufacturers, which currently ship their products overseas for launch. We are supporting them by fostering a new domestic launch market, with spaceports and launch operators providing services across the UK and catalysing investment from all over the world.”

The weekend’s Virgin Orbit mission launched seven satellites on behalf of the U.S. Space Force that will experiment in space-based communications, in-space navigation and climate change.

A number of national and international satellites have also been confirmed for the first UK launch later this year, with customers including Space Forge, Satellite Applications Catapult and Horizon Technologies, the MOD, DSTL and US National Reconnaissance Office, and the Sultanate of Oman.

Unlike many rockets, Virgin Orbit’s Launcher One takes off horizontally, carried aloft by a modified Boeing 747 aircraft, named Cosmic Girl.

This was Virgin Orbit’s fourth commercial flight. In January 2021 the company put its first satellites into space, after launching from California’s Mojave Air and Space Port.

“The success of this last launch in California is extremely rewarding for Spaceport Cornwall and the UK space sector. It was amazing to see both the team from Virgin Orbit and our team working together to mirror the US operations in real-time - ensuring we’re mission-ready for the summer. This gave us a taste of what is to come and our team could not be more excited.”

The UK Government’s National Space Strategy sets out how the UK will become the first country in Europe to launch satellites into orbit in 2022. Spaceport Cornwall is one of seven potential spaceport sites across the UK which will help to cement the UK’s role as a science superpower and help unleash a wave of innovation across the country.