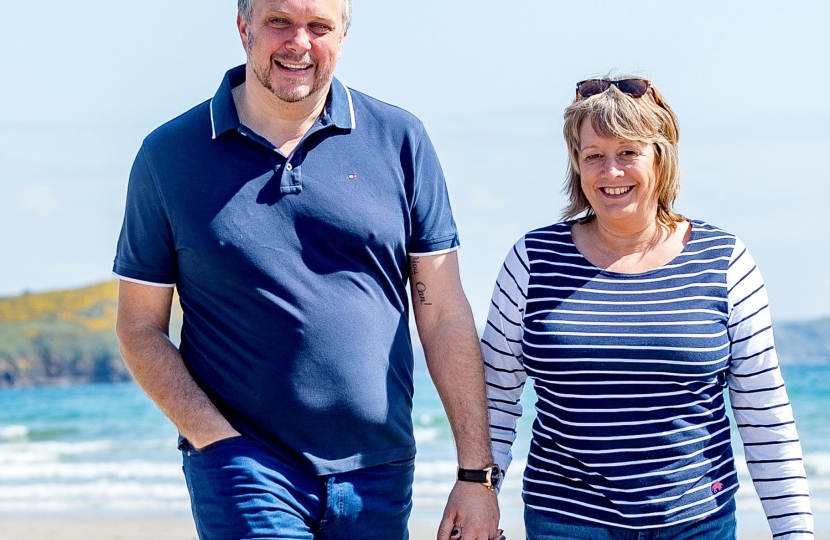 Steve was born and raised in St Austell. He has always lived and worked in mid-Cornwall so understands first-hand the challenges local people face.

He has been married to Anne for 34 years and they have 2 boys. Before becoming Member of Parliament for St Austell and Newquay Steve had a broad experience of working in Cornwall across a variety of sectors. This included working for a bank, local church and charity, starting and running his own business in St Austell and being a local councillor at both Town and Council level and a member of the Cabinet at Cornwall Council.

Since Steve’s election in 2015 he has been an effective voice for Mid-Cornwall in Parliament but also willing to stand up and challenge the Government when needed. In fact, in April 2017, the Cornish Guardian stated in their own editorial article that Steve Double has proved himself to be ‘a proud Cornishman first and an elected Conservative second.’

Steve has secured Government money towards a £40million investment fund for Cornish businesses.

Steve has worked to make Newquay the frontrunner to be the location of the UK Spaceport, with the bid now submitted awaiting an outcome.

Steve has secured Government backing and funding for the £87million new A30 link road to St Austell, something which people have wanted and talked about for years, but which has only got moving since Steve was elected as the MP for the area.

Steve has worked with the Government to increase NHS funding across Cornwall, with a real terms increase every year, including a mental health in-patient facility for young people, £1million funding for Treliske’s A&E and £24million for social care which will relieve pressure from delayed discharges from Treliske Hospital. Also nearly £50million for capital funding, and protecting vital services in Cornwall such as radiotherapy and renal transport services, money for a new women and children's hospital at Treliske, and £450million to upgrade NHS services in Cornwall.

Steve has worked with the Government to deliver funding for new schools in Mid-Cornwall, several of which are now nearing completion or being built.

Steve worked with the Government to deliver £500million in additional funding to support residents and businesses during the COVID-19 pandemic.

He keeps his popular blog and website up to date with regular posts on an ever growing mountain of policy issues, as well as with his weekly newspaper columns

Steve has attended thousands of local events, including visiting nearly every school across Mid-Cornwall and has a popular programme for schools to visit him in Parliament.

Steve was appointed as Parliamentary Private Secretary for the Department for Health and Social Care by the Prime Minister in August 2019.

From February 2020 to September 2021 Steve served as Parliamentary Private Secretary (PPS) to the Health Secretary, at the heart of the Government's response to the COVID-19 pandemic.

Steve was appointed a Government Whip by the Prime Minister in September 2021.

Member of the Council of Europe, the first Cornish MP to sit on this body.

Charing the All Party Parliamentary Group (APPG) for Ocean Conservation, working with Cornish charity Surfers Against Sewage, leading the fight against marine litter and protecting our beaches and seas which are so important to Mid-Cornwall.

Chairing the APPG for Hospitality and Tourism, which works with industry representatives to support the growth of the tourism and hospitality sector. Steve hosts regular meetings in Parliament on key topical issues facing the industry, including business rates, employment, the ‘tourist tax’ and digital issues such as online accommodation sharing platforms.

Chairing the APPG on Christianity in the Holy Land, a newly formed cross-party group with officers from both the Commons and Lords who share an interest in raising awareness of the challenges faced by Christians in Israel.

Co-chair of the Regional Airports APPG which works to lobby government on behalf of small regional airports. In this role, he has been able to effectively support Cornwall Newquay Airport which was recently named the best regional airport in the country by one national newspaper.

Chair of the General Aviation APPG.

Vice chair of the Parliamentary Beer Group which works to support pubs and breweries. In this role, he has been able to actively support the work of St Austell Brewery – an important local business and employer.

Vice Chair of the APPG on Hong Kong.

Vice Chair of the APPG for the Celtic Sea and has a particular focus on the development of floating offshore wind energy in the waters off the Cornish coast.

Vice chair of the APPG on Migration and speaks up for the needs of Cornish businesses to access migrant workers in the post-Brexit immigration system.

Vice chair of the Pharmacy APPG, which raises awareness of the profession of pharmacy and promotes pharmacists' current and potential contribution to the health of the nation. In particular, Steve has regularly spoken in favour of greater support for community pharmacies, which play an important role on frontline of the NHS and are first port of call for patients.

Officer on the APPG on Faith and Society. The APPG aims to highlight the contribution to society by faith-based organisations, identify best practice and improving understanding of the faith groups and communities providing innovative solutions to social and economic problems around the country.

Chair of the influential Ceramics All Party Parliamentary Group which represents the ceramics industry which includes China Clay. In this role he has been able to influence government policy on issues effecting this important local industry to reduce the tax burden and promote china clay exports post Brexit.

Member of the important Parliamentary Space Committee where he has been able to promote Newquay as the frontrunner to be the location of the UK’s first spaceport. Steve is well known in Parliament for his active support for Spaceport Cornwall. He has met with Government Ministers dozens of times in order to secure their support for a Spaceport in Cornwall and continues to meet regularly with the Cornwall and Isle of Scilly LEP, Cornwall Council and the potential operator Virgin Orbit.

Member of the APPG for the Great South West, a group of cross-party MPs and Peers who have come together to promote the interests of the South West and celebrate all that is great about the region.

Chair of the Christianity in the Holy Land APPG

Vice Chair of the Laos APPG

Officer of Faith and Society APPG

Member of the Local Democracy APPG

Member of Wine and Spirits APPG

Want to ask Steve a question?

Then please do so by using the contact form here