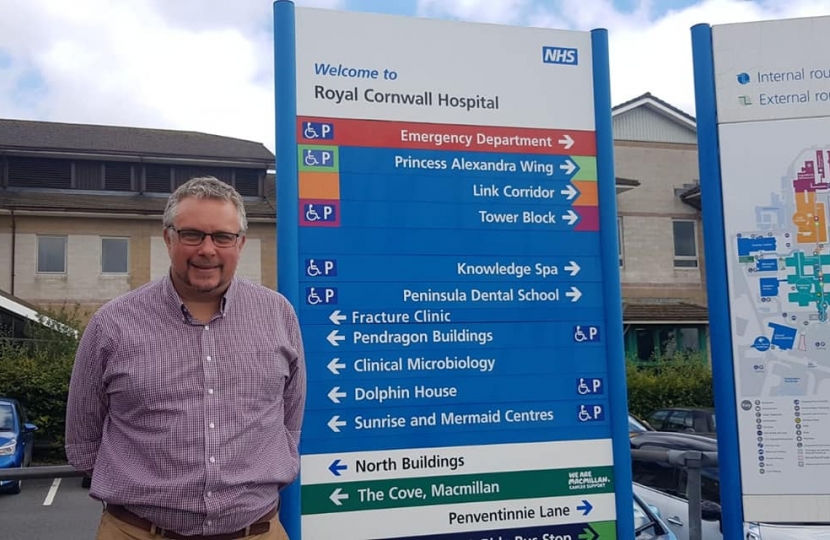 We have had confirmation from the NHS that the plans to remove radiotherapy services from the Sunrise Centre at Treliske, which would have seen patients having to make many long journey out of the county when they are at their most vulnerable, have been dropped.

I campaigned, along with my Cornish MP colleagues, and thousands of local people, to scrap this idea earlier this year and am pleased that NHS England have now listened to common sense and dropped these proposals.

Steve Double, Member of Parliament for St Austell and Newquay, has joined with the other Cornish MPs to meet with NHS England representatives in Westminster to discuss the future of radiotherapy services and modernisation proposals.

NHS England launched a public consultation in October 2017 called 'Modernising radiotherapy services in England', which proposes new radiotherapy networks to encourage more collaborative working between clinicians and radiotherapy service providers. The proposals will build on an investment of £130 million to replace equipment and invest in new treatment planning systems.

The meeting between local MPs and NHS England comes after concerns were raised about how a change to radiotherapy services may impact cancer patients in Cornwall, potentially leading to longer travel times.

At the meeting, NHS England assured MPs that the proposals will not see services being moved out of Cornwall and that responses from local residents will help shape the proposals. The main proposal is to implement eleven new Radiotherapy Networks which will have more joined-up working between radiotherapy providers and introduce a new clinical model to ensure that patients can access innovative treatments as close to home as possible.

The consultation received over 11,000 responses, the vast majority of which came from Devon and Cornwall. The higher than expected number of responses means that NHS England will need more time to review them and build the feedback into the proposals, which will be made public in the summer.

“It was good to meet with NHS England to discuss their proposals and the concerns that have been raised in Mid-Cornwall and across the county by concerned residents. I was especially pleased to hear their confirmation that the Sunrise Centre is safe and will be retained in Truro. ”

“I am pleased to see that NHS England are clear that the South West needs special consideration because of its geography and sparse population and that it absolutely recognises the importance of patients being able to access services close to home.”

I was very concerned to hear of NHS England’s consultation that could see some radiotherapy services be moved from Cornwall.

This is a decision that would be made by NHS England rather than by the Government but there are a number of things I have done as Member of Parliament for Mid-Cornwall to ensure the correct criteria are considered, as well as public opinion taken into account when it comes to making the decision.

Since hearing about this consultation, I have written to both the CEO of Royal Cornwall Hospital Treliske, and the CEO of NHS England outlining my strong objections to any plans to downgrade the services available in Cornwall. I have also raised it in the debate in Parliament as well as writing to the Health Minister and meeting with the Secretary of State for Health.

Cornwall has unique challenges as a large and rural county. Currently the radiotherapy services provided at Royal Cornwall Hospital Treliske (RCHT), while not central to the whole of Cornwall, are still more than an hour’s journey by car for people living in communities in the far west of the county – even longer when the roads are busy in the summer season.

The proposals that could see services moved to Plymouth or even Exeter, would see vulnerable and ill people in need of regular intensive treatment have to endure round trips lasting many hours for their radiotherapy, on a daily basis for several weeks. This is simply unacceptable and could mean the difference between life and death for patients who have would no choice but to take these long and uncomfortable journeys when at their most vulnerable.

RCHT also has a relatively modern treatment centre, the Sunrise Centre, the existence of which is down to the generosity of the Cornish people, who to date have raised over £3 million since 2000, both towards the original cost of opening the building as well as additional services and facilities associated with running it since it opened. Moving any radiotherapy services away from Cornwall would be a disappointment to the Cornish community who have donated so much money over the last two decades and cannot, in any way be justified.

Since the consultation closed I have been pleased to see strong responses sent from both NHS Kernow and RCHT defending keeping these services where they.

I will continue to follow this process closely and will do all I can to ensure these services are retained in Cornwall.