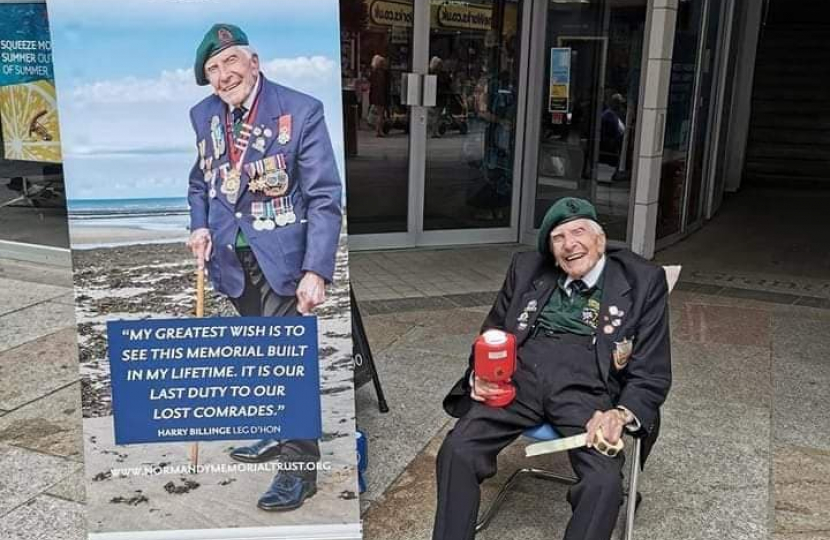 Steve Double, Member of Parliament for St Austell and Newquay has called on St Austell Town Council to name a road in the town after local war hero and fund raiser Harry Billinge MBE.

In his letter to the council, Steve writes:

“I am sure we have all been moved by the response to the passing of Harry Billinge MBE. There is no doubt that Harry touched the lives of many people both locally and across our country.”

“Although Harry’s life and achievements have been recognised nationally by Her Majesty the Queen, in the Honours List, and in naming a GWR train after him, I know many people in St Austell feel that we would like to have a way to honour his life locally. While he gained national recognition for his work on behalf of the Normandy Memorial Trust, he was very much a local St Austell man.”

“Therefore, I am writing to ask whether the Town Council would consider naming a road, in St Austell, in Harry’s memory. I believe this would be a simple and fitting way to honour his life.”

“Harry Billinge’s heroic acts throughout his life touched us all, both his service for his country and his later herculean fundraising efforts for the Normandy Memorial Trust.”

“While the Normandy Memorial will be a lasting legacy for Harry, as well as all his brothers in arms who fell in that conflict, I speak for many people locally who want to see a lasting tribute for Harry in our own town.”

“What better way to remember Harry than through renaming a street in St Austell after him. The Government is currently consulting on making this process more practicable, and so I have written to St Austell Town Council and asked if they will consider starting this process. I will be very happy to support them in doing so and hope this will provide a small part of Harry’s vast legacy for us all.”