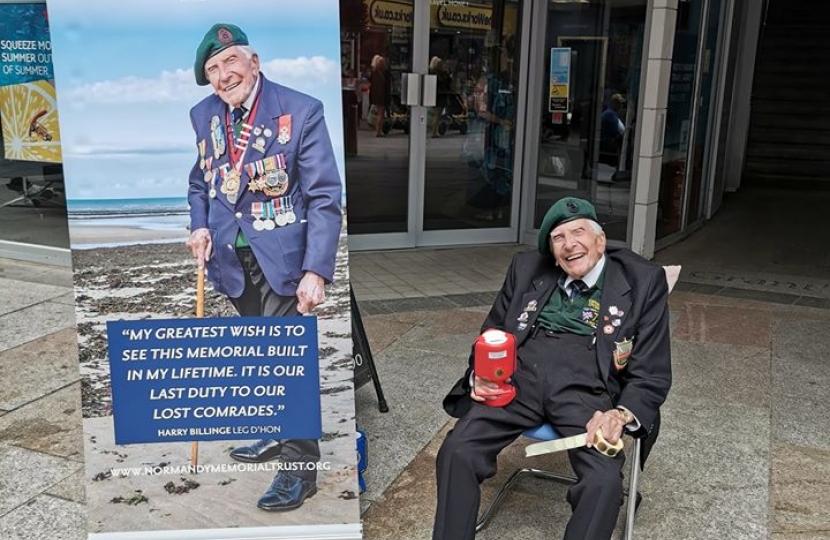 Steve Double, Member of Parliament for St Austell and Newquay has congratulated local D-Day hero and fund raiser Harry Billinge on his recognition in the New Year’s Honours List.

Harry Billinge, 94, a well known local fundraiser for veterans, will receive an MBE for Services to Charitable Fundraising.

“I cannot think of anyone who deserves an honour more than Harry. Over recent years Harry has become a well known character in St Austell town centre as he set out to raise money for a D-Day memorial through the Normandy Memorial Trust.”

“Always immaculately turned out, Harry is a stalwart of our town centre, rain or shine raising money in his cheerful and inimitable style.”

“He recently rose to national prominence with the coverage of the 75th Anniversary of the D-Day landings and it is absolutely the right time to recognise his phenomenal efforts for these causes to honour the sacrifice of so many of his comrades.”

“Following the coverage of the D-Day anniversary there has been a massive outpouring of support locally for Harry with calls being made to recognise his dedication and achievement. As the local MP, along with a number of local councillors, the town council and local BID I was pleased to nominate him and delighted to see him honoured in this way.”

“I look forward to seeing Harry again soon and I am sure his fundraising will continue – an inspiration to us all!”