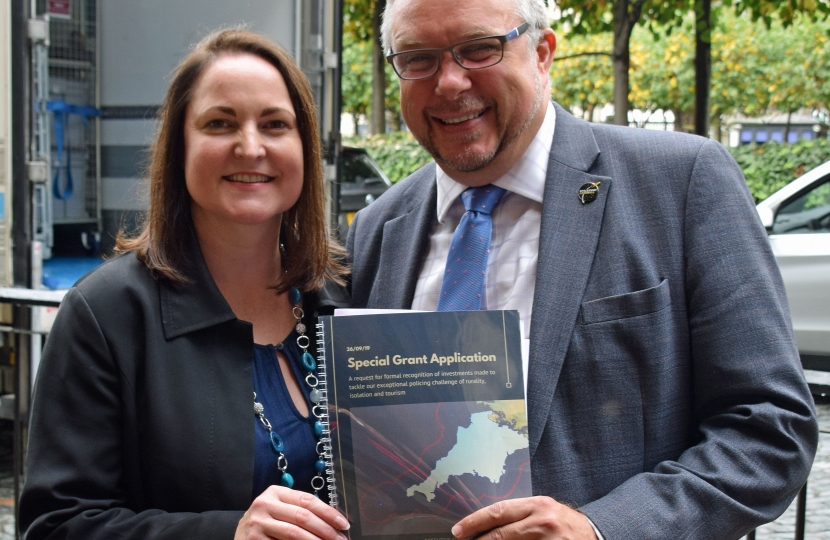 Steve Double, Member of Parliament for St Austell and Newquay this week joined Devon and Cornwall Police and Crime Commissioner Alison Hernandez and a delegation from the area to present the case for seasonal funding for Devon and Cornwall police.

The Devon and Cornwall force is the largest in England and receives more tourists than any other force outside London, yet has one of the lowest police officer densities in the country.

Visitor numbers have boomed in recent years due to the popularity of Westcountry resorts and a low pound.

While tourists bring prosperity to the two counties and islands that make up the force area, there is no direct revenue from this to fund police, who feel the strain of the ‘summer surge’ Police and Crime Commissioner Alison Hernandez argues in a 60-page bid for Special Grant funding.

Devon and Cornwall officers and staff struggle to cope with an 11% rise in crime in the months between April and September, a 14% rise in incidents and an 18% increase in missing people.

The Home Office Special Grant fund comprises of £73m which is ‘top-sliced’ from police forces and then used to deal with exceptional or unusual circumstances. Last year it was used to help Wiltshire Police cope with the Salisbury novichok nerve agent poisoning.

The bid details £17.9m of expenditure over three years that is linked to the ‘summer surge’ and requests compensation for this.

“Fair funding for Cornwall is something I have always supported in all areas. I am obviously delighted that we will be benefitting from the Prime Minister’s recent announcement of 20,000 new police officers. However there is a particular and historic problem in Cornwall with funding for our police not reflecting the massive population increases we see in the summer, and the corresponding strains on our infrastructure and services that this puts on us.”

“That is why I am pleased to be supporting Alison and the delegation in making this sensible case for change.”

“I hope the Home Secretary listens and acts accordingly and I will continue to work with my Cornish MP colleagues and local and national bodies to ensure Cornwall does not lose out in this or any other area.”

“We have invested heavily in services like the rural crime team and innovated by collaborating with other emergency services to create new roles to help the force cope with unprecedented levels of calls for service over the past three years,” said Ms Hernandez.”

“The increase in activity is no longer confined to the school summer holidays, we’ve shown that it begins in April and lasts right through to September, but the impact on our people and the communities they serve is year-round because training and leave have to be taken in the remaining six months.”

“The force has to deal with this additional challenge of a peninsula that is isolated from others, with just 10% of it is within six miles of another force area, and it’s predominantly rural, so our resources and spread thinly.”

“Devon and Cornwall are stunning places to visit but we’re not free from crime. In recent months two huge cocaine hauls were detected off our coast, the force has disrupted county lines drug dealing schemes and a serious and organised people smuggling operation.”

“Our communities deserve consistently good service from the force this bid is all about us being able to keep them, and our visitors, safe.”